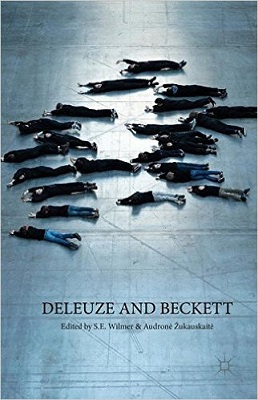 Reviewed by Will Daddario* (USA)

Deleuze and Beckett is the second anthology curated by S. E. Wilmer and Audronė Žukauskaitė in recent years. Thinner and narrower in scope than Interrogating Antigone, this book still shares structural similarities with the former in its attempt to give a thorough overview of the textual, theoretical and theatrical meshwork of, in this case, the philosophy of the Frenchman Gilles Deleuze (1925-1995) and his interest in identity and difference, and the oeuvre of Beckett.

In a nutshell, the book’s chapters concentrate “on specific aspects of the Deleuze and Beckett interface” (4). Part I samples some philosophical concepts germane to the study and comprehension of both Deleuze and Beckett, including that of difference, becoming and multiplicity. Part II appraises each figure’s fealties to psychoanalysis and the ways in which psychoanalytic theory influenced their thoughts on subjectivity. Part III gauges Deleuze’s and Beckett’s thinking on space and time, particularly how those concepts shape our relation to memory and media. Part IV hones in on the theatrical and performative dimensions of Deleuzian philosophy and Beckettian artistic production.

The volume’s appearance in the present moment makes sense given Wilmer’s connection to Trinity, which houses both a substantial Beckett archive and the ghostly traces of the Nobel Laureate’s pedagogical repertoire (he studied there as a student and taught there as a lecturer), and Žukauskaitė’s long history of engagement with Deleuze, not to mention the editors’ history of close collaboration.

In the last decade, many scholars have drawn readers’ attention to the linkages between Deleuze and, well, a lot of things. There are currently twenty-six titles in the “Deleuze Connections” series published by Edinburgh University Press. The first seven pages of a search on Amazon for “Deleuze and” yields fourteen more titles. Seizing upon the “and” is a common strategy, since Deleuze found the conjunction particularly pleasing due to its ability to define multiplicity and to construct fabulous machines capable of expanding thought beyond the static images created by dominant social and artistic narratives. And yet, because of the abundance of such scholarship, a fair question arises: do we need another one? Do we need this book about Deleuze and Beckett? What does this connection accomplish? What new ideas does it produce?

Scrutinizing the “and” in the title to discover both what it does and what it does not (seem to) mean is a good way to begin answering those questions. For example, the “and” here does not mean the same thing as the ampersand in the Palgrave “Theatre &” series. There, the “&” demonstrates how theatre as an artistic practice is inherently interdisciplinary. Thus, the “and” signifies extant linkages within the discipline of theatre studies that outfits that discipline for direct communication with neighboring fields.

Neither does the “and” conjoining Deleuze and Beckett mean the same thing as the “and” in the title Adorno and Performance (Palgrave 2014). For the latter, “and” marks an intermittence between the philosopher and the practice of performance, and hints at the labor that the book will attempt to accomplish by forcing a connection of the one with the other. With Deleuze and Beckett, instead, “and” seems not to indicate a disciplinary exercise (in Deleuze and/or Beckett Studies), nor does it tarry with the disjunctions between Deleuze and Beckett. Rather, the “and” here presents a modest historically and textually legitimate pairing.

Deleuze, though only dedicating two essays to Beckett exclusively, conjured the great writer in numerous works throughout the years, especially in his publications with Felix Guattari, in order to illustrate the principles of schizoanalysis. While there exists no concrete proof that Beckett ever read Deleuze, on the other hand, he was nonetheless concerned with many of the same epistemological and ontological problems as the French philosopher. As such, the pairing manufactured for this book does indeed lead, as the editors claim, to explicit collisions between the two figures’ works.

That said, however, a more appropriate title for this book may have been Deleuze’s Beckett or Beckett through Deleuze. This is so because each of the chapters delivers Deleuzian readings of Beckett. None of them attempts to fold Beckett’s artistic discoveries back on Deleuze’s concepts or review Deleuze through Beckett. Given the germ of this project within the journal Deleuze Studies, it is not surprising to find this primacy given over to Deleuze, but the unidirectional readings of the chapters end up privileging Deleuze’s concepts over Beckett’s affects and, in this regard, continue the historical hierarchization that places philosophy on top of art, as though Beckett will become more legible once read as “minor literature” (a key Deleuzo-Guattarian term).

If “and” requires scrutiny in the attempt to determine the texture of this volume’s scholarly products, so too do the other title keywords. “Deleuze” here refers to the Philosopher (capital “P”), nothing more or less. I sense here a missed opportunity since, in recent years, as the scholarship in the field of Performance Philosophy has demonstrated, “Deleuze” has come to signify much more than a creator of philosophical concepts. He also steps into the roles of performance artist, theatre critic and savant of everyday life. The “Beckett” of the title signifies a more dynamic topos, insofar as it refers to the historical figure as well as the short stories, plays, television programs and films created by him. For the most part, though, “Beckett” is the name of a literary machine displaying philosophical tendencies. Taken altogether, the book Deleuze and Beckett forwards Deleuzian sketches of Beckettian artistic events.

Intriguingly, most of the contributors use tentative language when framing their essays or pursuing their lines of thought in these sketches. [All emphasis in what follows is my own:] “One might thus read not only Beckett through Bergson . . .” (Gontarski 37). “I will explore [. . . the] notion of becoming-imperceptible . . .” (Žukauskaitė 60). “It may, perhaps, be helpful to illustrate how an explicitly Deleuzian reading of a Beckett text . . .” (Keatinge 89). “It thus seems that eroticism and, beyond that, desire is to be sought . . . in the writing process itself . . .” (Ost 97). “I would argue that . . . Beckett in his plays reconfigures the theatrical event . . .” (Chattopadhyay 230).

Sometimes, these tentative phrasings evolve from strictly Deleuzian ground, such as in Chattopadhyay’s chapter, “‘I switch off’ Towards a Beckettian Minority of Theatrical Event,” where the conditional verb tense mimics Deleuze’s thinking about the event: “Deleuze thinks that the event has always happened in the past, or it would be happening in the future, and its present can only be seen as an endless continuation” (241). Mostly, however, the language driving the chapters gives the impression of casual intellectual forays through Deleuzian landscapes toward Beckettian territory in search of landmarks capable of announcing the legitimacy of using Deleuze’s philosophy to interpret Beckett.

Will readers ultimately benefit or lose out from this narrow focus on the couplet of (mostly) Deleuze and (then) Beckett? Because the weight of the inquiries is, overall, lopsided in favor of Deleuze, the contributors make frequent mention of Deleuzian favorites Bergson and Nietzsche. Indeed, as the editors highlight in the introduction, “The Deleuzian philosophy of difference results not only in the destruction of representation, but also in the conceptualization of change and time. Therefore, one of the most important common points between Deleuze and Beckett is their interest in Henri Bergson’s philosophy” (6).

Readers do not, however, hear much about the thinkers that influenced Beckett such as Vico (via Croce), Schopenhauer, Berkeley, Geulincx, Leibniz, Windelband, Samuel Johnson, Mauthner and the early Greeks. Nor is Heidegger brought into the picture, though the German thinker clearly plays a major role in the work of both Deleuze and Beckett. As such, the editorial/curatorial process may have narrowed the purview of the book a bit too much. It is worth noting here that Deleuze and Beckett is about half the length of Interrogating Antigone and that additional chapters on, for example, Heidegger, may have helped round out the Deleuze-Beckett connection.

More importantly, if we challenge the claim about the importance of Bergson to both Deleuze and Beckett, we run into some problems. In this volume, David Addyman makes the argument that Deleuze’s expansion of Bergson’s spatial theories, most notably those found in Difference and Repetition, were anticipated much earlier by Beckett himself. While substantiating his claim, Addyman demonstrates the usefulness of mining Bergson’s works for spatial theories (instead of the oft-cited durational theories), for understandings of both Deleuze’s philosophy and Beckett’s literature, thus supporting the editors’ claim about Bergson’s necessary participation in the Deleuze-Beckett dyad. In his essay for Matthew Feldman and Karim Mamdani’s 2015 volume Beckett/Philosophy, however, the same author problematizes this claim.

True, “Bergson was rare among Beckett’s philosophers in that he was one of the few that the author appears to have read first hand, rather than read about in synopses” (Addyman, “Beckett, Bergson, and the Philosophy of Space” 103). But, “Beckett’s postwar work is fundamentally opposed to Bergson’s” and “Beckett’s brief but intense flirtation with Bergsonism seems to be waning by the time of the composition of Beckett’s first novel [in 1931]” (104, 121). Thus, in Deleuze and Beckett, Bergson is a necessary point of comparison, while, in Beckett/Philosophy, Bergson is a problematic philosophical foundation for those studying Beckett’s work. Which one is it? Why does the chapter in Deleuze and Beckett not linger on this contradiction?

Contradictions such as this do not undermine Deleuze and Beckett completely; rather, by ignoring or overlooking these types of contradictions, each chapter begins to feel partially unfinished, a feeling that leads me to recommend that the book as a whole be read in tandem with other works. The archival research and historical sensitivity demonstrated in Beckett/Philosophy, for example, complements the more theoretical ideas here. Likewise, Laura Cull’s Theatre and Immanence helps to discuss the material dimension of theatre and performance that the essays in Part IV of Deleuze and Beckett lacks.

On a more positive note, one undoubtedly helpful aspect of Wilmer and Žukauskaitė’s book is that the specialty research foci and academic chops of the contributors offer helpful glosses on key Deleuzian concepts, such as the Time-Image and the Crystal-Image articulated in Cinema books. Such glosses are always helpful for obtaining a new perspective on Deleuze’s challenging work. The language of the editor’s introduction, by distinction, requires (perhaps assumes) fluency in Deleuze’s philosophical language and, as such, readers might benefit from keeping a copy of Brian Massumi’s A User’s Guide to Capitalism and Schizophrenia close at hand.

Students both new to and familiar with Deleuze and Beckett will no doubt enjoy the flights of thought captured in these pages, though the monographs of the individual contributors will likely provide more depth for the more advanced researcher. 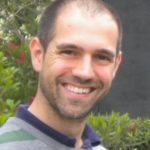 *Will Daddario is a founding member of Performance Philosophy and the Chair of the Performance and Philosophy Working Group in Performance Studies International. His monograph, Baroque, Venice, Theatre, Philosophy will be published by Palgrave Macmillan, in 2017.