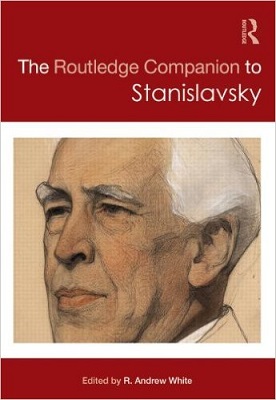 This book is rather over-long, comprising 340 pages of text, not counting the index, and 23 different articles. It has a significant number of eminent scholars contributing to it, as well as a couple of American actors. These include W.B Worthen, David Krasner, Maria Ignatieva and Rhonda Blair, while the actors, whose essays tend to be just around three pages long, are mainly talking about their own experience. At the same time, while Anatoly Smeliansky is certainly an important scholar, his contribution here is simply a translated reprint of his introduction to a recent Russian edition of Stanislavsky’s correspondence.

Most of these articles/chapters certainly make a significant contribution to the understanding of Stanislavsky’s work and its influence. There is a great deal of new information about Stanislavsky included, as well as various contemporary evaluations of Stanislavsky’s work: all of which makes this a valuable volume for theatre students.

Some of the essays, for instance, Malague’s on “Stanislavsky’s System and Women: A Feminist Reading of New Translations,” are breaking new ground: Malague moves beyond the standard female critique/attack on Stanislavsky to demonstrate ways in which his theories on acting can be reinterpreted. Others, for example, the opening essay by Ignatieva, which discusses family background and childhood, as well as Carnicke and Rosen’s piece on Stanislavsky and Opera, expose an aspect of this great director and actor that is hardly ever mentioned and largely goes unrecognized.

Listengarten’s essay on “Stanislavsky and the Avant-garde” of his time—in particular the symbolists and his connection with Gordon Craig—is a very useful expansion of his assumed connection with realistic naturalism. The documentation in most of these essays is generally excellent and very detailed, while arguments tend to challenge standard perceptions, as with Hohman’s essay on Stanislavsky and Chekhov that “points to areas in which the traditional narratives of the relationship might be productively disrupted.” Indeed, Hohman’s discussion demonstrates that both were highly independent artists who disagreed not only about minor details but also major interpretation of Chekhov’s plays, so that no single way of viewing their relationship can be justified.

At the same time, some of the essays take this approach too far, describing, for instance, Ibsen’s metaphysics as meta-theatre, or approving the myth of Stanislavsky by citing the author Anastas’ev’s acceptance of the Moscow Art Theatre’s adoption of Stalin’s dominant Socialist Realism in Stanislavsky’s productions.

However, and reflecting the American perspective in this volume, one of the major repetitions—and disagreements—is discussions of the American attempts (largely by Strasberg) to reproduce Stanislavsky’s acting system.

The balance between theory and practice is advertised as the major element of this volume. Yet, not all the essays in these two sections seem relevant. In particular, Carnicke’s piece on “The Effects of Russian and Soviet Censorships on the Practice of Stanislavsky’s System,” while giving new insights, should be in the opening section, despite the reference to “practice” in its title. It argues that the effect was the increasing emphasis on realism. At the same time, Beck’s “The legacy of Stanislavsky’s ideas in non-realistic theatre” should belong in part IV rather than its present placing in Part III, since it deals with the influence of Stanislavsky on contemporary theatre. Similarly, Blair’s essay on “Active Analysis—More Active Than You Know: Stanislavsky and Cognitive Science” should be in Part III, associated with Worthen’s essay on “Stanislavsky and Cognitive Theatre Studies,” even though Blair’s piece hardly refers to theatre at all and is focused almost completely on developments in psychological science, which makes it seem rather abstract.

There is also a problem with the visuals: there are only eleven illustrations in all. And, apart from one of a play by Charles Dickens, produced in 1922, each focuses solely on people off stage, representing the MAT group of actors on tour and Stanislavsky with Max Reinhardt or with Firmin Gémier. Three of individual MAT actors in roles are included, but these are actors who abandoned the group and remained in the countries they accepted. In addition, these are not full stage photos, but concentrate solely on facial expression of the individual actor. Apart from the very crowded and non-naturalistic staging of The Cricket on the Hearth, there is no image of any of Stanislavsky’s more famous or well-known productions.  Since many of these essays refer to or describe Stanislavsky’s productions, stage photos would have been extremely useful for the reader as well as for documentation. As it is, all photos are within a single essay, which describes the MAT tours of Europe and the United States during the 1920s, but does not discuss Stanislavsky productions in any detail.

The overwhelming American voice in this study of Stanislavsky is rather surprising, given that Routledge publishes in New York but has its main publishing location in London. Indeed, out of the 25 contributors of essays (plus two translators) only four are not living and practicing or teaching in the United States. There is one from Paris; two from Scotland (one of whom is a theatre director, who has also presented plays in America); and one—Anatoly Smeliansky—from Russia. This is astonishing, since there are quite a few experts on Stanislavsky in England and Germany, as well as Russia and elsewhere in Europe—some of whom, such as Maria Shevstova, are cited in more than one of the published essays in this volume—and an international perspective would have been valuable. Of course, one or two of the contributors had immigrated to the United States from Bulgaria and Russia, but their vision is still very American in essence.

*Christopher Innes is the Canada Research Chair in Theatre at Toronto’s York University and Editor of Cambridge University Press’s series on theatre directors. He has published extensively on numerous aspects of modern theatre.

The Routledge Companion to Stanislavsky