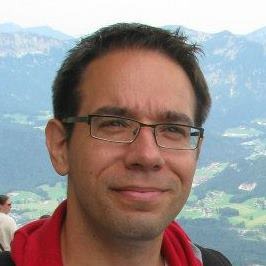 Let’s start with the concluding scene of Loser by Árpád Schilling (and co-written with Éva Zabezsinszkij). Here we see the director/main character in a grotesque situation: Schilling lies on a couch wearing nappies and a shopping bag on his head. He is preparing, as a last resort, to receive a prestigious award for great artists handed over by a representative of the current regime. Schilling is anything but opportunistic. He is an artist who actively confronts the system. He is hated and adored in his native Hungary, and acclaimed internationally. In Loser, Schilling has staged the treachery of the intellectual. Theatricalising himself, his body and his problems, he has examined the responsibility of the artist; the end result is a wry and unkind report on how he saw Hungary at the end of year 2014. A year later, in The Day of Fury (which is also co-authored by Zabezsinszkij), Schilling continued what he had started in Loser. 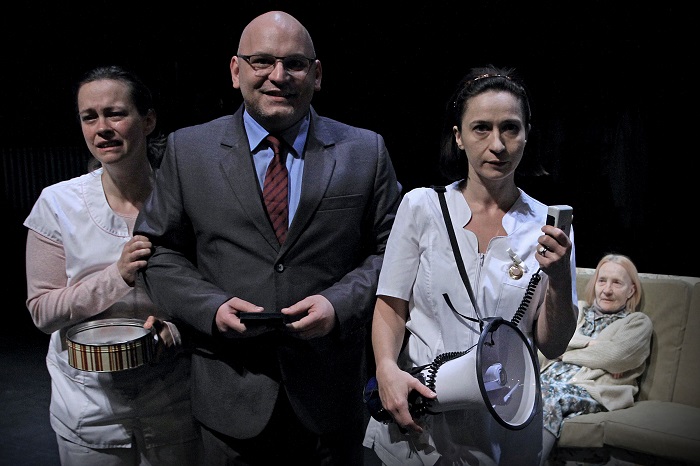 If the secret of Loser lies in its harsh radicalism, The Day of Fury is exactly its opposite: the biggest surprise of the performance comes from the transparency and parabolic wording, which offers no surprise at all. The Day of Fury uses thousand-year-old clichés of theatre and basic dramaturgical concepts to tell a story about Hungary in the year 2015. While, in Loser, Schilling presented a direct political statement to his viewers, in The Day of Fury, what we have is a crystal-clear parable. The latter work is, in a way, an inversion of Loser; in The Day of Fury  the unusual form hijacks the attention of the viewers, diverting them from the content, which is probably why, this time, Schilling chose a technique that was more accessible for a larger audience. We observe with distrust these familiar figures, in a familiar setting, as we try to locate the traps that the director has hidden for us.

Schilling  reclaims the genre of the morality play. That is why, on first viewing of the play, it has an immediate effect. However, if one watches the production on further occasions, it has a less instant impact. One could say, as a result of this audience response, that the production has failed. However, it is, perhaps, better to understand the work as one that operates, not at the level of hidden depths, but of superficies. 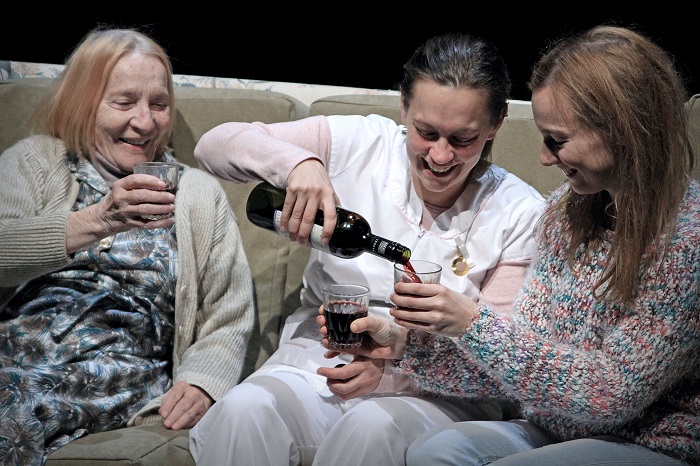 It is unquestionable that we have heard these stories a million times: in hospitals and schools; at the car mechanic; or the butcher. Schilling leaves behind the insider problems of high-brow intellectuals and, in accordance with the credo of a renewed Krétakör Theatre,[1] offers a voice to those who cannot be heard through the official channels. This time, the voice is not of the youth that is just getting acquainted with theatre or theatrical activism, nor of the Roma or the homeless, but of the main actors of his emblematic company, the former Krétakör, along with a few invited guests. This is evident the story and clear in its framework. What we see, from the first minute to the last, is “just” theatre. The sentences, the situations, the characters might be disturbingly familiar, but everything is strictly supervised by the omnipotent director and, unlike in the case of Loser, this production never leaves us in doubt regarding the fact that what we are seeing are “just” actors, telling us nothing but a fictitious story. Speaking of traps, this might exactly be it; does the director encourages us to lean back and enjoy the calvary of the main character, of this “little nothing,” as her mother calls her? When the 80 minutes end, we applaud, we stand up, we go home and nothing happens. Or maybe something does occur? 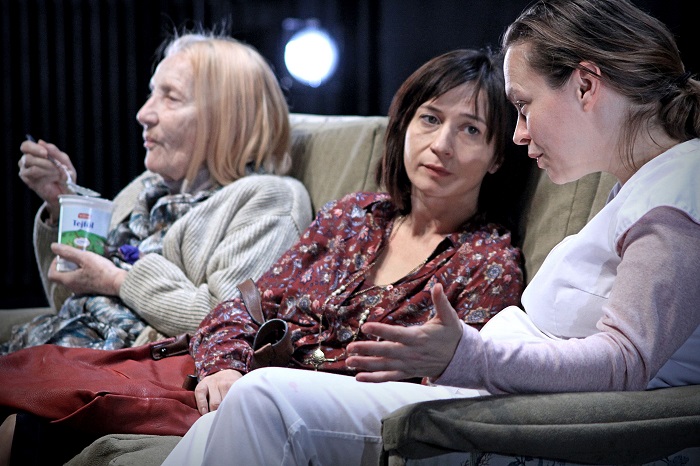 The inspiration for the performance was Mária Sándor, a nurse who specialized in the care of newborns and children, and who was the first to speak up, in 2015, about the tragic situation in the Hungarian health system. The nurse had dressed in black and invited her colleagues to a demonstration, but because she was forbidden to work in black attire, she resigned. She became a symbol, someone who represented bottom-up networks, professionalism and the brave youth that Schilling has always been so deeply interested in. This highly mediatized event seemed to be an ideal material for the production. 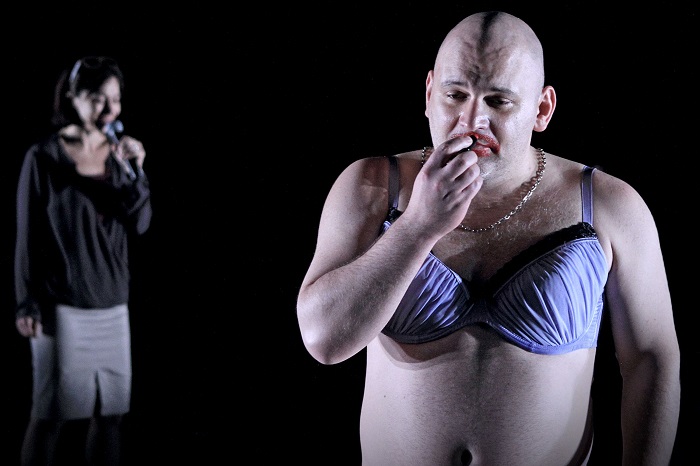 The hero of The Day of Fury is given a name that is as royal as her duty; she is called Erzsébet (Elisabeth, played by Lilla Sárosdi). We first meet her at a protest, where, together with her colleague (Annamária Láng), she delivers a list of demands of the health sector to the minister (Roland Rába), who in turn rewards the brave nurses with a prestigious prize. All of a sudden, everyone becomes a friend of Erzsébet. Encouraging text messages start to pour in, and she becomes part of another world; or, at least, so she feels. She is an ordinary woman who, before, had only watched the news on television. Now, she feels as if she is dictating the news agenda. After the film crew leaves her home, she is left with the dull reality of her one-room apartment, together with her sick grandmother (Judit Meszléry) and her teenage daughter (Kata Milla Kovács). While the always grumpy grandmother knows well that every tide has its ebb, the daughter does not understand why, if her mother is such a celebrity, she is not allowed to go on a trip to the sea with her classmates. At the beginning of the performance, we see Erzsébet at the top of the world, but then she slowly gets sucked into chaos, from which there is only one possible way out. 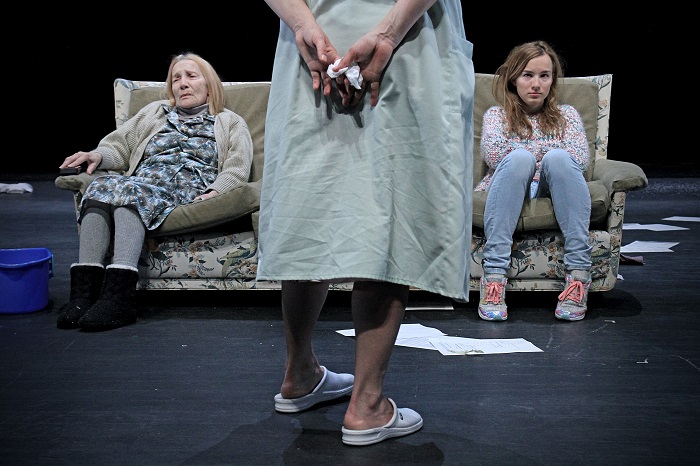 The Day of Fury presents a detailed view of the series of attacks against Erzsébet’s sanity. A series of short and cruelly satirical episodes bears close resemblance to the Biblical story of Job, intertwined with the Everyman myth. Erzsébet, due to some invisible outer force, loses everything that was ever important to her. She is fired from her job, then fails to find a suitable position to match her qualification. Consequently, she ends up working as a cleaner. What is more, her colleague, the spokesperson of grand ideals, turns out to have acted only out of her personal interests. The already awful relationship between the three women is stretched to the breaking point, but things get even worse with the grandmother’s illness and the private affairs of the teenager. A glimmer of hope flares up at one point or another, but the end of the tunnel appears to be nothing more than the start of another journey that is even worse. 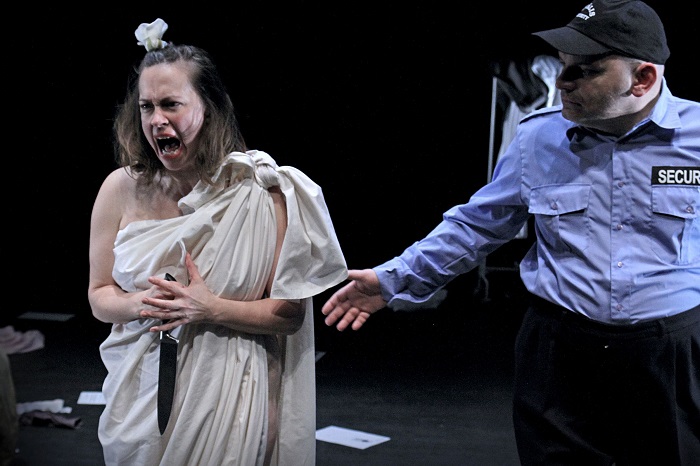 Erzsébet is put through a series of tough tests, and, although we can feel an incomprehensible power constantly dragging her down, we never stop cheering for her. She always stands up, she always searches for her place and the place of her loved ones, even if she knows all too well that she has got no power over the brutally new circumstances that surround her. She always hopes that she is the one shaping her own life, and does not and cannot recognize that she is merely a passive puppet, and that her slow motion decline is not due to a series of random occurrences but, rather, to a well-designed and perfectly-organized set of failures. Erzsébet is a guest at an amusement park called life, where she is offered the choice of bad and even worse rides. 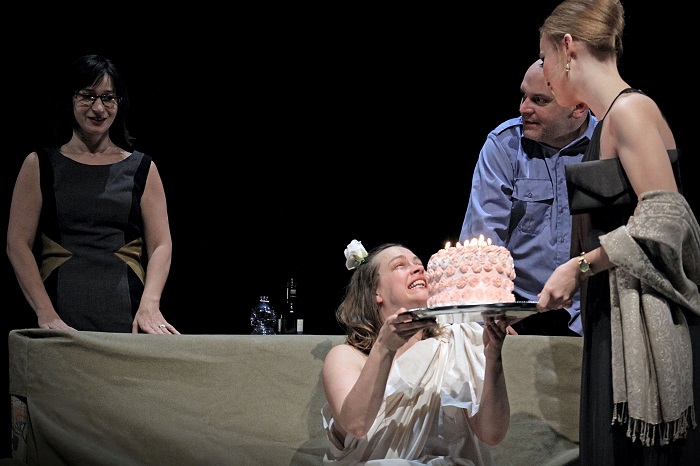 Schilling takes on the fitting role of the educator, who, together with his actors, presents a contemporary teaching, to edify us all. In this linear story nothing averts our eyes from the heroine, since all the characters that surround her, are shaped according to her. This is true even when we know for sure that Erzsébet Fekete is only a supporting actor even in her own story, in her own life. But we won’t be that, will we? 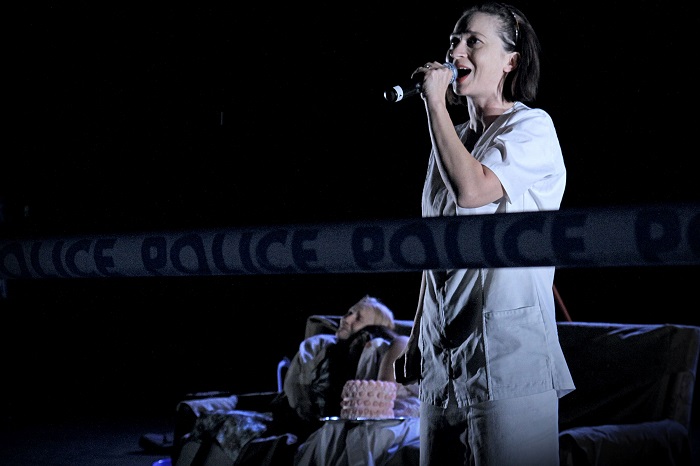 [1]This is Schilling’s former theatre company which gave its name to his current arts production company. 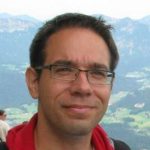 *Tamás Jászay lives in Budapest and is a theatre critic, editor and university lecturer. After taking his degree at the Arts faculty in 2003, he has published theatre reviews and various articles related to theatre, and, between 2009 and 2015, he has been co-president of the Hungarian section of the International Association of Theatre Critics. Since 2008, he has been editor of the critical website Revizor (www.revizoronline.com). In 2013, he defended his Ph.D. Thesis, focusing on the history of Krétakör Theatre.

The Limits of Action