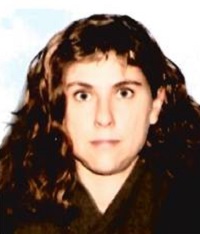 The award-winning work, Teatime Europe, addressed the controversial theme of the current migrant and refugee crisis in “civilized” Europe in a distinctive site-specific, performative mode. It was created by the Experimental Theatre of Thrace, based in the peripheral border town of Alexandroupolis under the direction of Giorgos Zamboulakis. The original work consisted of a live performance/action poetically documented and presented as a short video (7.24 minutes). Elements of this video performance became, in turn, an essential part of another live presentation at Man.In.Fest—International Festival of Experimental Theatre 2015, in Cluj-Napoca, Romania, winning the Grand Prize; the video performance also became a prominent part of the Hellenic participation at the Prague Quadrennial 2015,  themed  “Shared Space: Music Weather Politics.”

Since its foundation, in 2008, as an independent cultural organization, Experimental Theatre of Thrace has made an important contribution as a local collectivity, successfully bringing the whole community together while using visually elaborate work to foster an active social and critical direction. The company has engaged with topical themes and narratives inspired by the impact of the current socio-economic crisis, such as immigration, xenophobia, racism, materialist alienation. According to the artistic director, Zamboulakis, theatre thrives where politics fail, so long it can offer a poetic, self-reflexive and educational perspective, consolidating humanism and democracy. 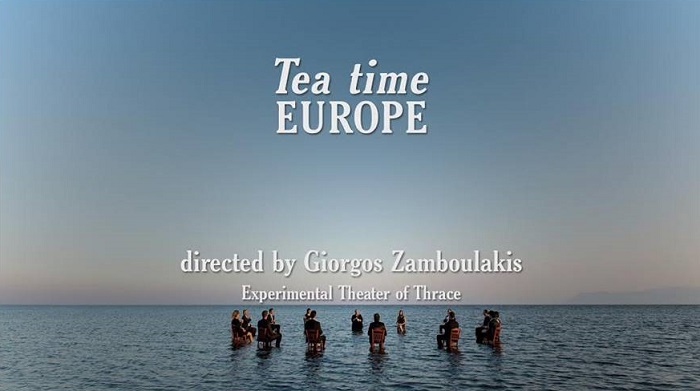 Τeatime Europe was partly inspired by the  legacy of the socio-political Αktion of the post-war avant-garde, and was clearly prophetic about the explosive dimensions of the migrant and refugee crisis in the eastern Mediterranean, particularly  Greece, Turkey and the Balkans. The performance took place in July 2014 in situ, in a seemingly serene waterscape at the delta of the Evros River. As the main physical boundary between Greece and Turkey, the Evros is a landmark of conflictual topography and symbolism. It has often been under the spotlight, not only as Greece’s physical border to Turkey and an epicenter of migration flows, but also as Europe’s symbolic and imaginary boundary to the “other” Middle East, as much as to the Asian continent in general. Such realities and conceptual overtones were successfully highlighted through theme and narrative, but even more so through the locational identity of Teatime Europe. Moreover, as Judith Rugg quotes, on an international level, the harsh realities of demographic space, borders and boundaries have often been used as a focal point of contemporary visual and performing arts.[1]

The core of the poetic and allegoric landscape of Teatime Europe featured a circle of 15 people, chairs submerged in water, sitting still, holding teacups. The performance narrative played metaphorically upon the idea of a surreal European teatime ritual turning unexpectedly into a jamming session; in a display of collective, spontaneous creativity, teacups and teaspoons were gradually turned into musical instruments, the sound escalating into a joint “heartbeat,” which, in turn, transformed into rhythmic motives similar to Ravel’s Boléro. At this point, Zamboulakis makes a reference to European culture “that gave birth to artworks that pay respects to humanity.” This particular rhythmic transformation was also masterfully reflected in the accelerated montage pace of the video work by cinematographer Theophilos Gerondopoulos. 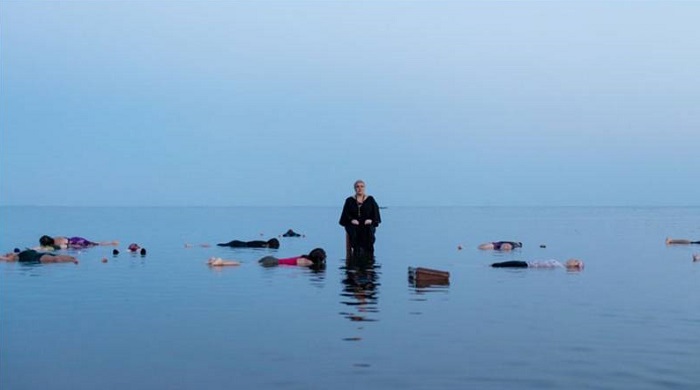 Subsequently, an ugly turnaround unfolds, as lifeless bodies and human debris—suitcases, shoes, clothes—make their appearance floating amidst the well-dressed, seated group of people, causing no apparent reaction. The work’s final sequence is framed by the archetypal solitary figure of the mourning mother against an emptied landscape; the circle of performers has ominously disappeared and the remains consist of an apocalyptic sea of drowned people. Singer/performer Kaiti Makri gives us a powerful solo performance of the traditional song “Τzivaeri” personifying the Mother lamenting for her immigrant child; the song’s characteristic refrain goes, “Softly, I tread on earth.”  As the director pointed out, “With this symbolic scene they pay tribute to all the people who lose their life in the pursuit of a better life in ‘civilized’ Europe.” It also makes vivid connections to Greece’s historic past as a land of frequent emigration; a situation that has resurfaced once again during the current economic  crisis.

On a visual and performative level, the piece makes indirect visual reference to the official European emblem, manipulating with irony and ambiguity the well-known design of a circular constellation against a blue background. This visual sign has been used since 1955 to symbolize unity, solidarity and harmony between the people of Europe; in Teatime Europe, even though it comprises of real people, it is used ambiguously, more as a consolidated form of exclusion producing a contested landscape.[2] 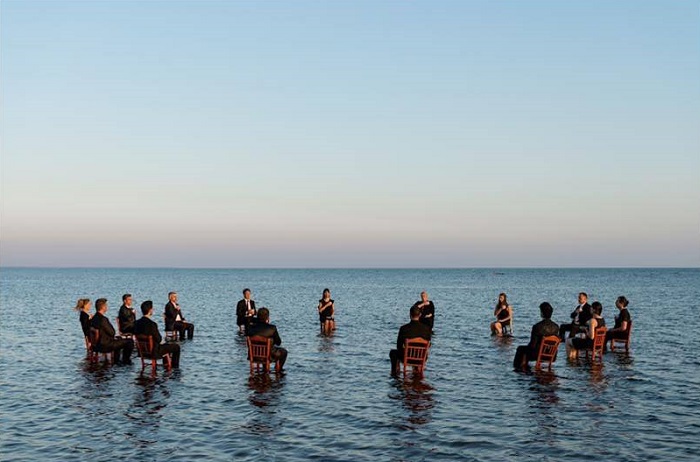 Most notably, several current critical theorists point to the complicity of our tolerance regarding the construction and maintenance of such a “Fortress Europe”—originally a military propaganda term.[3] Furthermore, according to political philosopher Giorgio Agamben, as the state of exception becomes essentially the rule and the normal mode of political governance, institutions and the equilibrium of democratic constitutions cannot function effectively and boundaries between democracy and authoritarianism seem to erode.[4] 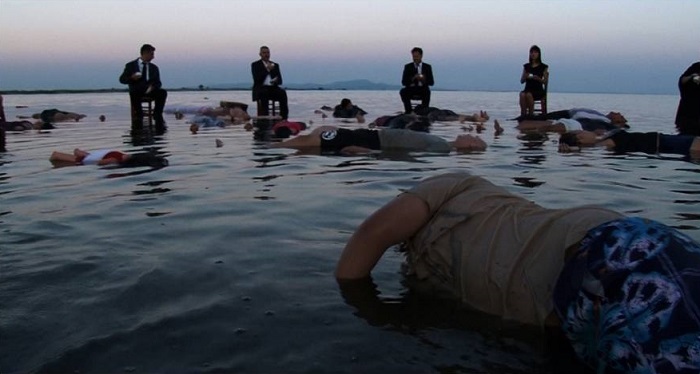 Teatime Europe, as a site-specific work, exemplifies the intense interrelation of the spatial and the performative, where the signification process in the performance is initiated and developed primarily through real, pre-existing space, taking the empirical parameters of space, place and geographical location in their wider socio-spatial context. Performance locating strategies at the delta of the Evros River employ the eloquent signification of physical realities and imaginary spatialities, as well as further explore an evident persistence in the mapping of natural landscape in Greece through diverse artistic means and mediums. Especially in cinematography, the presentation of the liquid element proves an expedient as much as timeless obsession both symbolic and conceptual. Furthermore, as the migrant and refugee crisis unfolds around the maritime borders of Europe, this acquires renewed significance.

A contested concept such as the border performs multiple socio-spatial exclusions, experienced particularly in border towns and communities. Evros River consists of one of the more important migrant and asylum seeking gateways to “civilized” Europe; therefore, performance themes, ambiences and real performance location of the work were better matched and spatially fine-tuned. Polysemy of the liquid element, liquid materiality, as well as the theme of natural beauty contrasting with harsh realities led to the choice of the performance location. Zamboulakis attests to his own tragic personal experiences, such as the body of an immigrant floating on the river while on a boating trip—daily incidents for local people.

The work was created at large on a volunteer and participatory basis; participants were primarily drawn from the non-professional human resources of the company, while two hundred volunteers were deeply involved. As Zamboulakis put forward, such a work with the local community promotes dialogue on one of the most pressing problems of contemporary Europe, foregrounding the acceptance of otherness as an essential value of humanity and a fundamental principle of our civilization. For the director, more awareness building of European citizens is needed through art; at the same time, the viewing positions and information flows on the subject should be problematized.

One of the main aims of Teatime Europe was to challenge the heavily mediatized reception of such information and  the indifference and apathy it produces, when people become convinced that breaking news is not truly significant or relevant to their own lives. As Zamboulakis elaborated:

We listen on a daily basis to breaking news such as “700 people lost their lives in the sea near Lambedousa, among them 70 children,” or, “12 bodies were collected in the sea near Kos island, among them 3 children”; the way the information circulates non-stop, as part of an information-overloaded world, takes away the real force of what has taken place and the potential for empathy, whilst the citizen is diminished to a mere passive recipient.

Teatime Europe suggests a radically different approach to the subject, pushing us to reflect on current controversies and to employ a dynamic redefinition of the European centre to peripheral Greece—not least by means of exploring ancient and archetypal humanitarian ways of providing asylum (ασυλία), ways to overcome stereotypes and fear, and to receive, welcome and accept the “foreigner,” the “other,” next to us. 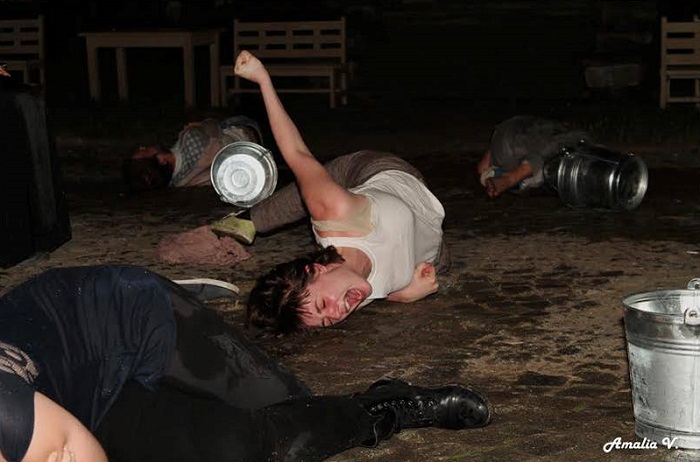 [2] See http://europa.eu/about-eu/basic-information/symbols/flag/index_en.htm. Originally used by the Council of Europe, the emblem was officially adopted in 1985 and used by all EU member states. 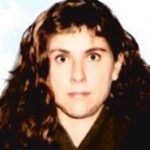 *Maria Konomis holds a degree in Greek Literature (Aristotle University of Thessaloniki) and a PhD in Theatre Studies (University of Athens). She trained as a Scenographer at the University Arts London at Wimbledon School of Art (BA Hons) and Central Saint Martins (MA). Her credits include more than sixty productions of theatre, film, opera and performance. She has taught extensively at the Theatre Department of the University of Patras, University of Athens, and Peloponnese, and at the National Theatre Drama School. Her current research interests and publications revolve around history and theory of performance space; modern and contemporary scenography; theatre and the city; performance and site-specific live art.