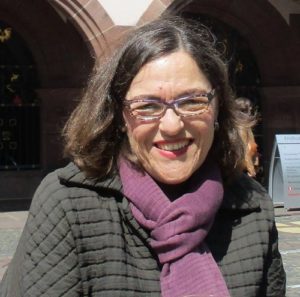 On Saturday, July 25th 2015, the sunrise in the ancient theatre of Epidaurus was unique, on several levels: unique because archaeological sites are never open to the public at dawn; unique because the enchanting sounds of a Japanese flute, or the incantation of a Noh master addressing the Sun was new to this setting; and unique because no two sunrises are the same. All of us present there spent two heavenly hours, observing the landscape as it was gradually being lit by the sun at our backs, while the Japanese artists were chanting their Invocation to the Sun, facing east. Master Rokuro Gensho Umewaka (b. 1948) and his outstanding group of actors and musicians kindly offered to perform the ritual, for the sake of those interested to attend. The couple of thousand spectators who flooded the lower tier of the theatre will spend the rest of their lives cherishing the unrepeatable emotions and feelings of that morning. Some of the oldest and wholly traditional Noh gestures, sounds, costumes and performative manoeuvres were exposed to our sleepy eyes, while our minds fluctuated between dream and ethereal reality: in a trance, we were following the movements and sounds of the ritual mesmerized, feeling content without understanding any of the words spoken or the meanings of the visual clues. 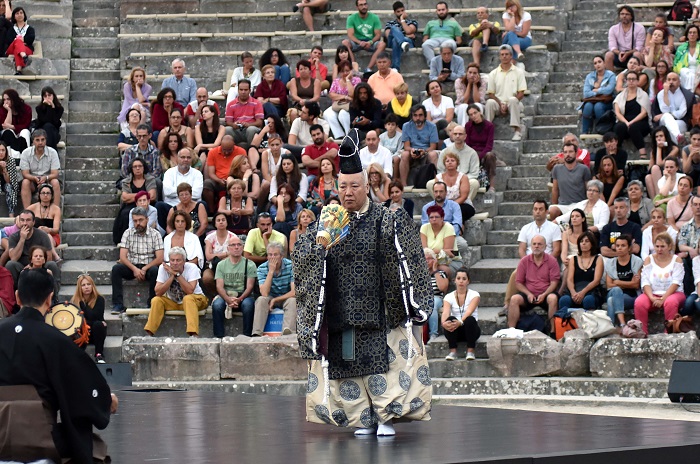 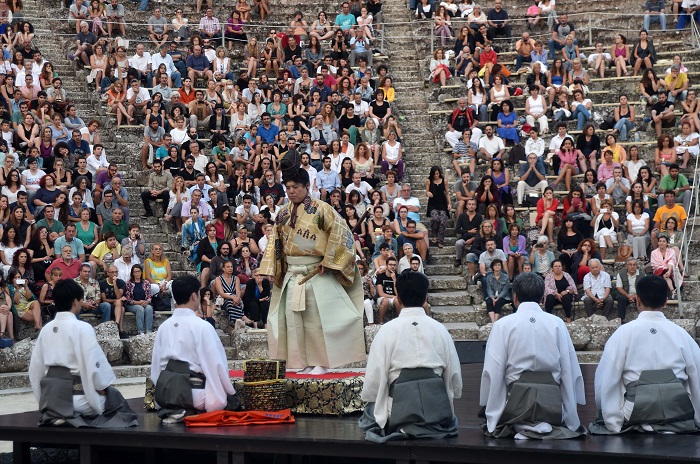 Later the same evening, a much larger crowd of about seven thousand spectators filled the theatre, eager to watch Noh/Nekyia, an experimental staging that combined two very old traditions, with several common characteristics (abstract and minimalistic poetic form, emphasis on the narration, importance of music): the recitation of a Homeric epic song delivered by a Japanese Noh master, turned into a rhapsode.

The director Michael Marmarinos (b. 1956) along with Master Gensho Umewaka put together a Noh performance inspired by the descent of Odysseus to the underworld, as told by Homer in the 11th book of the Odyssey, commonly known as the Nekyia. If Odysseus wants to find his way back to Ithaca, he has to visit the world of the dead, in order to learn from their otherworldly knowledge and get instructions from Tiresias for an informed return (nostos). Half-way through the narration of the hero’s encounters in Hades, we learn that Odysseus is telling the story himself like a «practiced bard» (aoidos) to an audience of Phaecians. This is a moment of mise-en-abîme in the Odyssey, where the actual singer identifies with the hero, who identifies with the singer, narrating his own sorrows. The stories usually enacted in the Noh tradition represent encounters between the living and the souls of the dead. Thus, the journey of Odysseus to Hades presented an ideal backdrop for the creation of a poem narrated within the content and form parameters of the Noh tradition, or to put it in the director’s words: “Nekyia, with its distinctive structure and content, provides a unique narrative ground for the art and performance of excellence that is Noh theatre.” 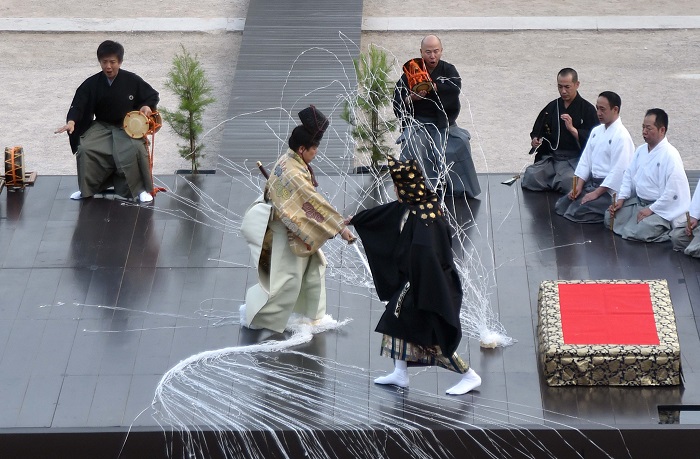 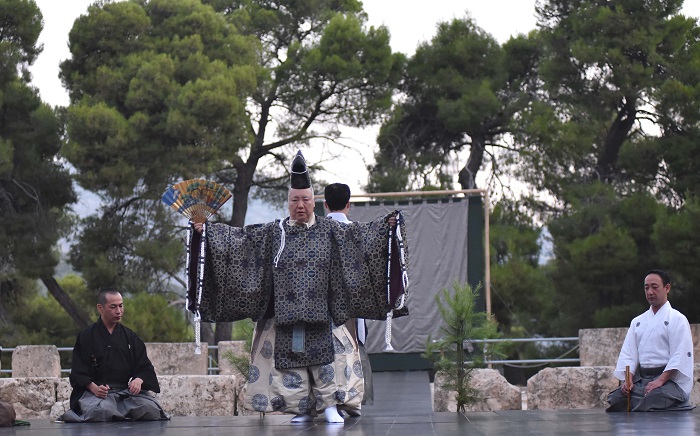 Under the direction of Michael Marmarinos, in an austere set designed by Eva Manidaki, who simply adjusted the Noh set to make it fit into the much larger orchestra space in Epidaurus, and under the equally simple and limpid lighting by Eleftheria Deko, the master and his cast presented the toils and tribulations of a mortal’s perambulation among the dead. Master Gensho played Tiresias and Circe, while Yoshimaza Kanze played Odysseus, both dressed in finely crafted traditional silk costumes and masks, moving around with slow ritual steps, sweeping the surface of the polished wooden stage. Interestingly, the chorus of the dead had uncovered unpainted faces, following the usual Noh practice that forced us to reconsider the essence of life and death (and of life in death), in tandem with art vs. reality. 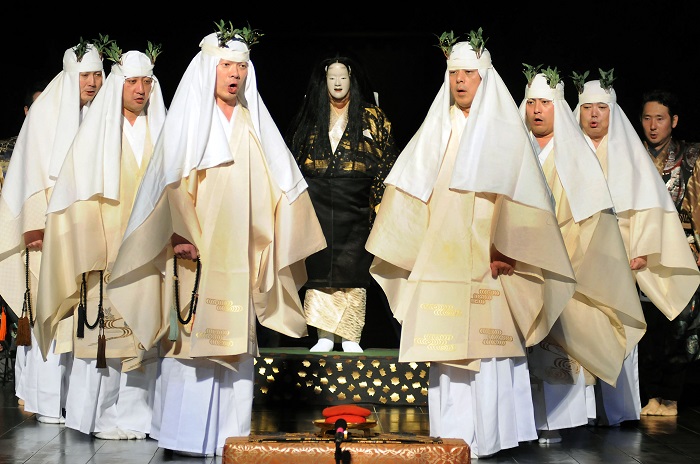 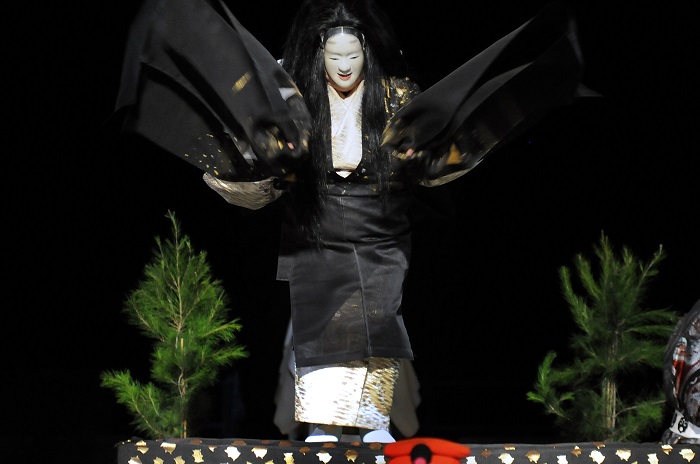 The most powerful moments of the Homeric Nekyia were masterfully represented: the encounter of Odysseus with his companion Elpenor, with his beloved mother Anticlea, whose death was unbeknownst to him, his repeated and failed attempt to embrace her, his encounter with Agamemnon, who had been slaughtered in his bath, by his own wife, after surviving the extreme dangers of the battlefield and above all, the fact that Odysseus operates following the gestures of the living. As a soldier and warrior Odysseus is used to drawing his sword, as an automatic gesture of self-protection; the repetition of this gesture in the underworld encapsulates the very essence both of the Homeric song and of the Japanese performance: that the dead are sought after by the living, for the sake of the living; that although one needs no protection from the shadows, the instinctual moves are part of being alive. 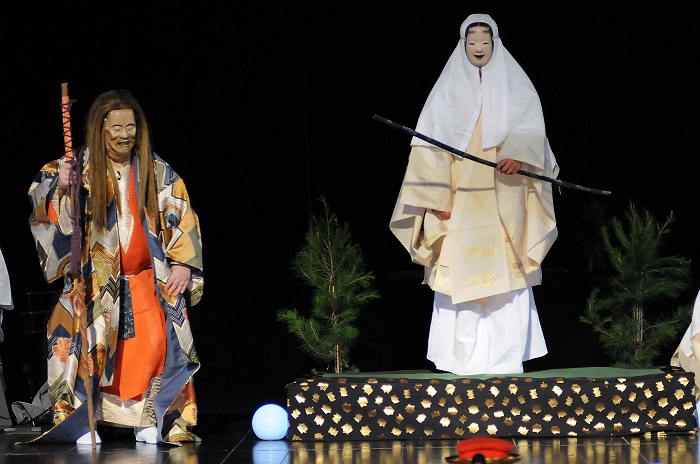 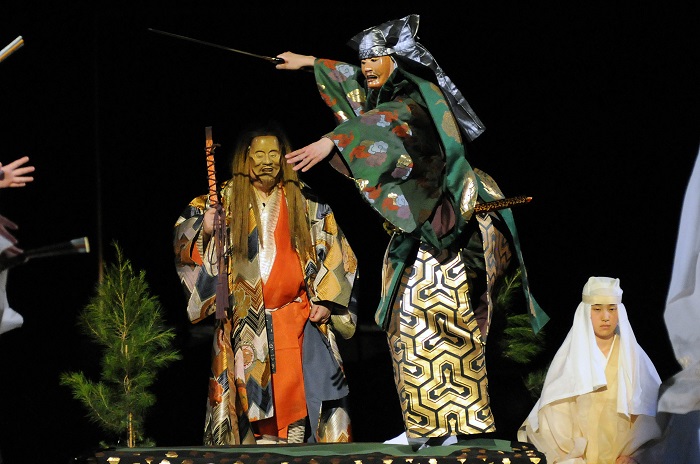 What the audience will remember forever is: 1. the powerful message of the encounter with the dead, as it is valued by both traditions; that learning from the dead helps you cope with life, 2. the utter respect that the Japanese Noh artists have for their art, for themselves within it, and for the audience facing them, and 3. the unparalleled healing power of art produced through the combination of the previous two factors. Master Gensho in his brief introductory words in the program wonders “how this work will speak to the hearts” of the audience. One can reassure him that what we all experienced that night, barely three weeks after the most politically agonizing moments in Greece in the last forty years, was simply unforgettable: after the extreme polarization of the referendum of July 5th, when we were all divided into YES (to the austerity measures and to the European Union, as it were) and NO supporters, watching Noh/Nekyia helped us come to our senses, re-appreciate the value of friendship and communication and, above all, it reminded us of the unequalled experience of attending a theatre performance. The uncanniness of the content was coupled with an uncanny atmosphere of reverence that reigned among the spectators, who watched silently, almost without breathing, finding solace in the familiar made unfamiliar.

It would be interesting to know the reactions of the audience in Tokyo—whether Homer had as soothing an effect on the Japanese audience as the art of Noh had in Greece at that specific moment. It would be fair to say that the oriental medium gave a special resonance to the Odysseic descent to Hades, in the country that prides itself on being the homeland both of Odysseus and of Hades. 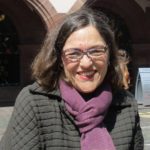 *Anna Stavrakopoulou is Associate Professor of Theater Studies at the School of Drama at Aristotle University of Thessaloniki. She studied literature and theater in Greece (University of Crete), France (Paris III-Sorbonne Nouvelle) and the USA (Harvard University). She has taught in the USA (NYU, Harvard, Yale) and Turkey (Bosphorus University) and is a founding member of the Harvard Summer Program in Greece (est. 2002) and continues to serve on its faculty. She has published books and articles in both English and Greek on modern Greek literature and theater.

Noh/Nekyia: Homer Recited in Japanese in an Ancient Greek Theatre