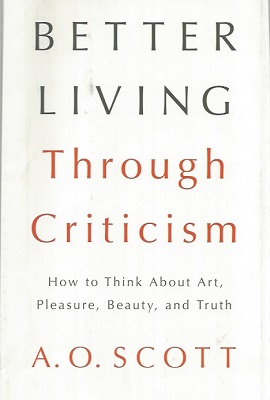 A.O. Scott has been the lead film critic for the New York Times since 2004. The son of two academics—his mother is a Professor of Social Science at Princeton; his father an emeritus Professor of History at City University of New York—his intellectual pedigree is clearly strong. Indeed, between both his parents one counts about two dozen books in print. So, by family standards, Scott fils seems something of a slacker being merely a critical journalist. Yet, writing for one of the major papers in the world, he is clearly a powerful journalist, and one whose opinions are highly sought after. His status alone makes this, his first book on and about criticism, important.

Brimming over with many thoughts on many different subjects, this book is in a way like the children’s song, Old MacDonald: “Here a thought, there a thought, everywhere a thought-thought.”  But random thoughts do not always add up to clear ideas, especially when he writes about criticism itself.

By his own admission, Scott says the catalyst for the book was actually a stinging Tweet by the American actor Samuel L. Jackson, who took him to task over a sarcastic review of the film, The Avengers (itself based on a comic book), produced by the Walt Disney Corporation, in which Jackson plays a leading role. Scott wrote of the central performance: “Mr. Jackson, with an eye patch and his well-practiced bellow, is more master of ceremonies than mission commander, and under his watch the Avengers indulge in some Rat Packy-y horsing around.” To which Mr. Jackson, clearly offended, Tweeted: “A.O. Scott needs a new job! Let’s help him find one! One he can ACTUALLY do!”

Scott became, for a time, the centre of the Twitter-sphere for his dissing of Jackson and, by extension, the movie itself, which he described as being little more than “a giant A.T.M. for Marvel and its new studio overlords, the Walt Disney Company.”

Having read this book from cover to cover, my own feeling is that it was not so much Jackson’s initial push-back that irritated Scott into writing, but rather the vitriolic eruption against him in cyberspace which came as a result of Jackson’s call to arms. Scott’s response was to marshal his personal resolve and write this book, thereby taking those minions by their metaphorical lapels and saying: “Hey you guys! Do you think writing this stuff is easy? Do you think just anybody can do it?”

And, of course, therein lies the rub for every critic in every major print media outlet in the world today. It’s not that anybody can do it, but rather that in the apparently unlimited confines of contemporary cyberspace “anybody” is doing it and has been doing it for quite some time now. Exit expertise.

Scott seems to have decided that, in his own defense and that of the profession itself, it was time to bring out his academic bona fides by writing a real book—with an index and everything.

As template for his project, Scott arrived at an interesting tectonic, one that combined straight narrative with a recurring Q and A format. But is it really a Socratic dialogue or is it plain old self-analysis? “Why do I do what I do?” he seems to be asking. “Why do I continue to do it?”

Now, don’t get me wrong. Lest anyone feel, from the tenor of what I have written thus far, that I have succumbed to the overwhelming cynicism of the age and I am simply trying to put self-analysis down, my response is not intended to be cynical at all. Far from it. When a member of our profession, especially one who occupies such a high profile position, decides to address the subject of arts journalism, in general, and the state of current arts criticism, in particular, I think it is an event worth noting and, indeed, applauding. And I do. But just not as enthusiastically as I had hoped going in.

I certainly don’t question Scott’s sincerity for a moment; his attempts to engage the aesthetics of art, pleasure, beauty and truth in a world of brutality and deprivation. Would there were more such discussion coming from knowledgeable critics who would replace barbarism with beauty and overwhelming technology with the creation of a greater humanity. This book tries to do that. At a modest 268 pages, Better Living Through Criticism, really does have large and noble aspirations. And yet. . . .

I applaud particularly vigorously his chapter on “The Critical Condition,” in which Scott attempts to break down and define the nature of the various schools of criticism, and questions how criticism is taught and whether or not it should even be considered as a profession. The chapter should be required reading for anyone in the field.

But gnawing at me is what I would call a bit of a bait and switch here. The book keeps changing character. On the academic hand, Scott trots out the usual historical suspects to bolster the philosophical lit-crit and classical foundations: Plato, Giorgio Vasari, T.S. Eliot, Harold Bloom, Edmund Burke and Alexander Pope, among others. He writes an extended exegesis on Kant’s Critique of Judgment and riffs on a poem by Rainer Maria Rilke. But his handling of the critical essays of Susan Sontag and George Orwell feels increasingly forced and unsupported in the end, putting one in mind of Northrop Frye’s admonition against criticism as “grab bag.”

On the other hand, there is remarkably little to be found in this volume on film or theatre criticism. If you are really interested in that subject, the writings of critics such as Pauline Kael or David Denby will give you more. And the only mention of theatre criticism (alas) is a single reference to the fictitious character, Addison DeWitt, the sardonic theatre critic in the film All About Eve.

In the end, much of the book can be summed up by looking at what Scott says about one of his favorite movies, the Disney/Pixar animated confection, Ratatouille. The centre of this film is an uprising by the sensitive rats of Paris in support of a young would-be rat-chef named Remy. Clearly the character that Scott likes most in the film is not Remy, though, but rather Anton Ego, the most powerful food critic in all of Paris. For Scott, he is a real hero. A review from him can make or break any restaurant and any chef overnight. And, in the end, the critic Ego makes Remy a star.

If Better Living Through Criticism were one of Remy’s meals or one of Ego’s reviews, I would have to say that I certainly get the intended metaphor. Yet, for me, the centre of the whole was a tad light, and somewhat overdone. Would I come back and give the chef a second chance? Absolutely. He is skilled and knowledgeable. I really do look forward to his next public oeuvre with relish. 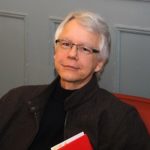 *Robin Breon is a free-lance theatre critic based in Toronto. His work has appeared in many of the country’s major newspapers including the Toronto Star and the Globe and Mail.

Better Living Through Criticism: How to Think About Art, Pleasure, Beauty, and Truth