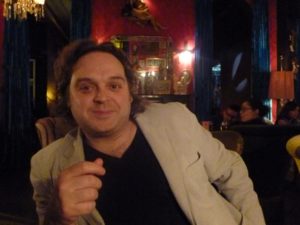 The most critically acclaimed production of the 2015 Edinburgh International Festival was the revolutionary monodrama The Encounter by English actor and theatre-maker Simon McBurney and his London-based theatre company Complicite. The piece overturns many of the common assumptions and prejudices about the single-actor play and extends the technical boundaries of the solo theatre show in ways that are startling and unforgettable. 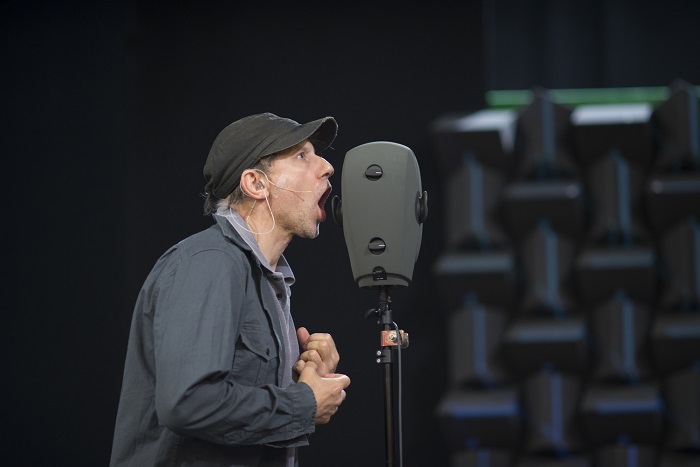 The piece was inspired by the book Amazon Beaming by Romanian-American writer Petru Popescu, which is an account of late American photographer Loren McIntrye’s journey into the heart of Amazonia, following his capture by members of the remote and endangered Mayoruna people, in 1971. Set in a region of Amazonia that encompasses parts of Brazil and Peru, it tells a story of an encounter between a modern, Western man and a pre-industrial people for whom the concept of the nation state is meaningless; the Mayoruna know no “Brazil,” no “Peru,” only the great forest that traverses an invisible, and therefore non-existent, border.

If modernity’s imposition of national boundaries is foreign to the Mayoruna, so is its philosophy of time. For this small, millennia-old hunter-gatherer society, time does not move forward in a linear way, propelled by modern ideas of technological “progress.” Rather, time is tied inextricably to the natural world of which they are a part. Threatened, like Amazonia itself, by the ruthless encroachment of “modernity” and “progress,” they seek, quite literally, to return to the source of the great Amazon River, not only geographically, but also temporally.

McBurney’s production joins together five distinct, but increasingly and intricately interwoven, elements. The director-performer’s intellectual and theatrical consideration of different understandings of the temporal is joined to Popescu’s narrative and expressed through a mutually enhancing and reinforcing combination of performance, brilliant set and lighting design and amazing audio technology. 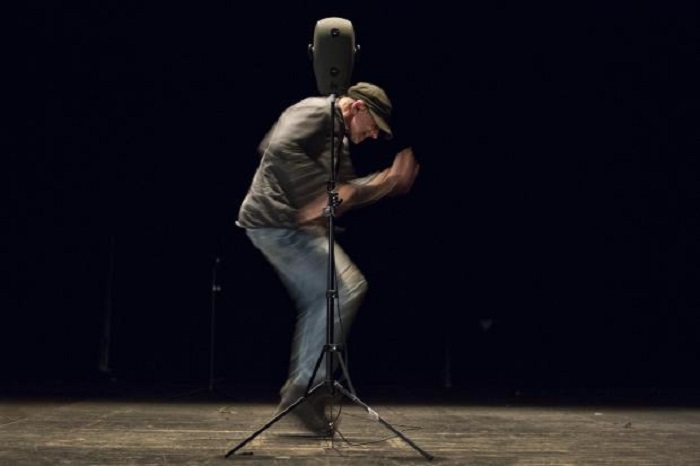 At the outset, the stage design looks unprepossessing. Played on a long, narrow purpose-built stage in the Edinburgh International Conference Centre, the set, which is strewn with water bottles, seems like a dishevelled rehearsal space. McBurney himself is dressed informally, in jeans and a cap, as if he is, indeed, in rehearsal.

The illusion of theatrical banality is punctured by two elements in the design. The back of the set is comprised of a three-dimensional wall of what look like little Mesoamerican pyramids; as the show progresses, the shifts in lighting reveal optical illusions similar to those achieved by the works of the Dutch artist Max Escher. An incidence of physical assault on the structure, late in the production, provides a spectacular moment of optical disorientation that operates almost as a form of visual onomatopoeia for the events being described.

At the centre of the stage is what looks like a black, abstract, metal sculpture of a human head mounted on a tripod. What the object is, in fact, is a high-tech, 360-degree audio receiver. Each audience member has an infrared headset, and McBurney ensures at the beginning of the performance that we are wearing them properly; that is to say that, when he speaks into the right “ear” of the receiver, we hear him in our right ear, and so on.

What follows is a work in which McBurney muses on philosophies of time, memory and the construction of identity, and upon the genesis of the project, before embarking on the Amazonian narrative itself. The seeming informality of the opening section of the piece (in which we hear a recording of McBurney, seemingly rehearsing at home and being interrupted by his young son) is actually a metatheatrical (and metatechnological) ruse. When the moment arrives for the actor to begin the story of McIntyre’s frightening and fascinating journey, we, the audience, are no longer certain of our own temporal orientation; that is to say that it has become difficult sometimes to know whether spoken words or sounds are “live” or “recorded.” What is past and what is present are no longer fixed and reliable.

There is in this a truly remarkable interplay, almost a mirroring, between technological form and narrative content. Just as McIntyre finds himself caught in the Mayoruna’s attempt to travel from an extremely dangerous modernity to an historical point of physical and cultural origin, so the astounding audio technology of the piece takes the audience into a psychological space in which time is uncertain.

McBurney’s telling of the story relies as heavily on his tremendous powers as a narrator and physical performer, as it does on the show’s immense technical capacities and its fine soundscapes (which evoke, for example, the fauna of the Amazon). The predominant visual mundanity of the set forces us to, consciously or sub-consciously, give greater priority to the aural. In some ways, the piece is reminiscent of an intense radio play or, perhaps, Derek Jarman’s 1993 film Blue (which consists of voices and sounds played in front of a blue screen). However, unlike a radio play or a movie, much of what we hear in The Encounter is live (albeit that it is in constant, uncertain and dynamic interplay with recorded speech and sound).

The result of the thematically appropriate combination of highly modern audio technology and the ages-old techniques of verbal storytelling and physical performance is an extremely compelling rendering of Popescu’s narrative. If you close your eyes, you can almost believe that you have been transported to Amazonia. Open your eyes again, and McBurney gets outrageously close to becoming the physical embodiment of McIntyre. For example, as he tells us of the moment when the captured photographer realised that his life depended upon running in circles, in the culture of the Mayoruna, backwards in time, McBurney inhabits utterly both McIntyre’s presence of mind and his frenzy.

As a piece of solo performance, in voice and body, McBurney’s takes its place among the great feats of monodrama acting that have graced Edinburgh International Festival and Fringe stages, such as: Tom Courtenay in Venedikt Erofeev’s Moscow Stations (1994); Michael Gambon in Samuel Beckett’s Eh Joe (2013); and Maureen Beattie in the Jennifer Tremblay trilogy (2015). In the technical arena, it does at least as much for the aural dimension of theatre as the work of Robert Lepage has done for the visual. The interconnection between McBurney’s performance and the production’s advanced audio technology is so close to perfect, so original and so mutually reinforcing, that the piece is likely to be remembered is a trailblazer in the use of sound in the theatre.

*Mark Brown is theatre critic of the Scottish national newspaper the Sunday Herald and Scottish critic of the UK national paper the Daily Telegraph. He is a member of the executive committee of the International Association of Theatre Critics, for which he is adjunct director of young critics’ seminars. He teaches in theatre studies at the Royal Conservatoire of Scotland and is currently a doctoral researcher at the University of Dundee. He is editor of the books Howard Barker Interviews 1980-2010: Conversations in Catastrophe (Intellect Books) and Oily Cart: all sorts of theatre for all sorts of kids (Trentham Books). He is a member of the editorial board of Critical Stages.

An Extraordinary Encounter with Technology: Complicite in Edinburgh