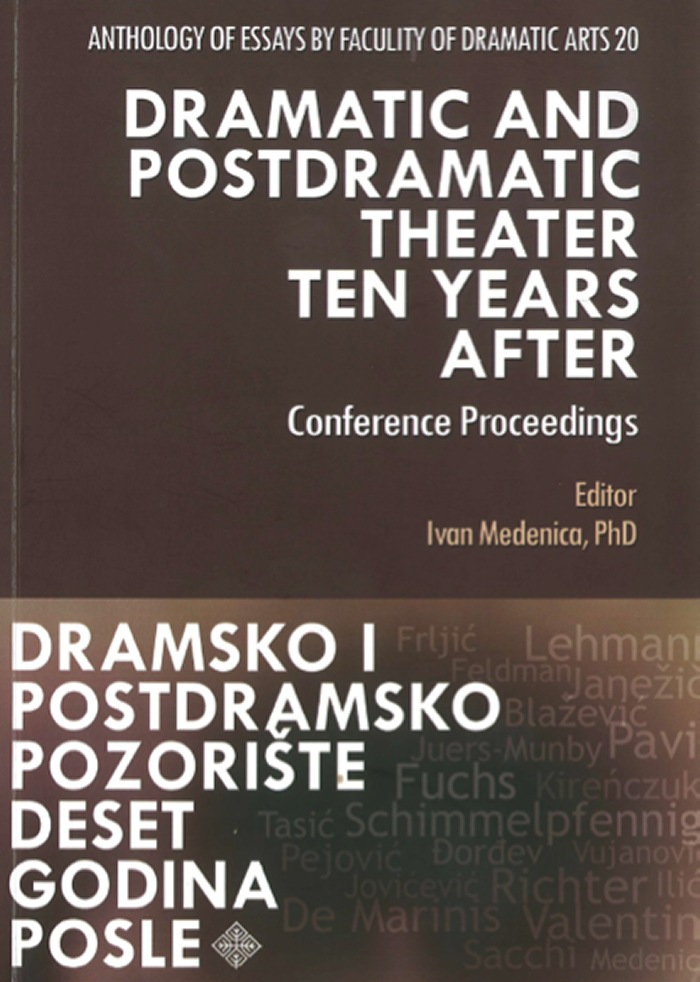 In the decade between the publication of Hans-Thies Lehmann’s Post-dramatic Theatre in 1999 and the Conference “Dramatic and Post-Dramatic Theatre: Ten Years After,” held in Belgrade in 2009, Lehmann’s groundbreaking study has been translated into 18 languages and has been widely discussed and debated.

With one eye on the present effects of the post-dramatic and the other on its future directions, the conference (and this volume) tries to answer a number of questions concerning the relation of post-dramatic theatre to text, performance and criticism both in Serbia and internationally. Well edited by Serbian theatre scholar Ivan Medenica, the 12 essays (including the editor’s Introduction which appears in both Serbian and English) reflect the multi-cultural quality of its overarching theme including texts in Serbian, French, Italian, and English. The book also includes a summary of each essay in both the language of the specific text and in Serbian.

Lehmann’s own essay is the real beginning of this collection and he speaks about what he considers to be the five significant tendencies of theatre practice of the past ten years—an emphasis on group work, a growing dialogue between theatre and society, a return of the chorus, the use of narration, and the reappearance of theatre of text. Given these tendencies, Lehmann goes on to argue for the interplay of these elements as tools “with which to re-think the European tradition of dramatic theatre.”

His own discussions of the pre-dramatic, dramatic, and post-dramatic, of theatre and performance, of the notions of “theatricality,” relational theatre, and the autonomy of the notion of the aesthetic (this last one meriting more attention I would suggest), serve as guides through the book.

Three response essays stand out here: Patrice Pavis’ “Réflexion sur le Théâtre Post-dramatique,” Elinor Fuchs’ “Post-dramatic Theatre and the Persistence of the ‘Fictive Cosmos’: A View from America,” and Marco de Marinis’ “La Prospettiva Post-dramatica: Novecento e Oltre.” All are insightful reflections on the notion of the “post-dramatic” and on the meaning and purpose of post-dramatic theatre. Each offers a rich discussion on the relation of post-dramatic theatre to mise en scène and performance, to the fictive, to dramatic composition, staging, and theatre studies generally.

Pavis’ essay, in particular, traces and maps the post-dramatic’s “hesitation” within the continental notion of mise en scene as well as the notion of “performativity” in anglophone countries. This essay also reflects on the future of the theatre as residing less in the elaboration of new forms than in established theatre subsidy systems, a rather grim notion.

Fuchs’ “View from America,” is a more evolutionary vision of dramatic form, critically examining Lehmann’s formula along the way. Wary of radical breaks in culture and discerning a new rapprochement between drama and theatre, Fuchs concedes that the “fictional world that aligns all dramaturgical elements into a synthetic whole,” is a hard thing to kill insofar as the dramatic re-absorbs post-dramatic experimentation and continues it, albeit in an altered form.

Like Fuchs’, Karen Jürs-Munby’s cross-cultural view (involving Britain and Germany) refrains from enthusiastic declarations of the post-dramatic’s shedding of dramatic conventions. In fact, it argues along with Pavis that Lehmann never really opposed “theatre without text” or “textual theatre.” Rather, she offers a provisional schema of the heterogeneous text-based and non-text-based trajectories that can be followed in order to arrive at post-dramatic performance anticipating a reformulated and robust theorization of the relationship of text to performance. This seems a felicitous development that would positively impact institutional structures, and, by extension, creative engagement with new writing for the theatre.

Along similar lines, Lada Čale-Feldman’s paper presents an intellectually stimulating and post-structuralist-inflected approach to the post-dramatic use of textual “material.” She presents three different examples from the past 40 years of Croatian theatre practice as evidence that post-dramatic theatre “treats the text … as Lacan treats the human body: as an imaginary reminder of the coherence of a textual entity endowed with a sense and a meaning, repressing the fear of fragmentation, castration, and founding/ontic dublicity.”

In a very different style, Annalisa Sacchi’s paper, examines the (post-dramatic) stage as a place of memory practice building on Walter Benjamin’s notion of “citable gesture.” Sacchi, like the writer of the next essay, Ana Tasić, who critically examines the use of live video relay in contemporary theatre, shows in stark light how post-dramatic experimentation can be simultaneously full of regenerative possibilities and wrought with challenges.

Equally revealing is the penultimate article of the collection: Oliver Frljić’s “Post-dramatic Theatre and Political Theatre,” a thought-provoking essay that reflects on the political potential of contemporary post-dramatic theatre by analogy with Alain Badiou’s elaboration of the “communist hypothesis.” What is particularly appealing in Frljić’s thesis is that it moves far beyond simply problematizing Lehmann’s conception of the depoliticization of theatre towards the formulation of a fresh approach to the issue of the political in contemporary theatre.

An essay by Serbian Vlatko Ilić rounds off the discussion by offering a positive—although hardly unproblematic—answer to the question posed by his essay’s very title “Do we still need theatre?” Ilić would “initiate a re-ideologization of the gaze . . . in order to enable the comprehension of the potent experiences of live performance.” The book concludes with Ilić’s prescient call for a post-disciplinary theatrical paradigm whose “radical experiences of the impossible” will be able to interrupt control of contemporary social life by mediatized and market-oriented conjunctions.

An intellectually fascinating, informative, and cleverly structured collection of essays, Dramatic and Post-dramatic: Theatre Ten Years After breaks new and fertile ground for research and reflection. One can only wish here for a more thorough mapping of Serbian “post-dramatic” terrain itself through the inclusion of more evidence on the connection between local theatrical phenomena, production, and experience. This, however, is not so much a lack but rather an invitation for a continuation of this important debate. 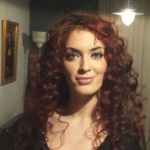 [1] Katerina Delikonstantinidou is a PhD student in the School of English at the Aristotle University of Thessaloniki. She is assistant editor of the academic journal Gramma/Γράμμα: Journal of Theory and Criticism. Her research interests include Theatre and Performing Arts, Ancient myth and religion, Greek Tragedy, and Ethnic Studies.