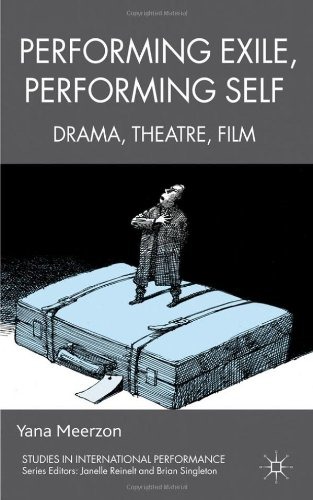 This minutely documented study by Yana Meerzon, an Associate Professor in the Department of theatre at the University of Ottawa, analyses the poetics of an “exilic theatre” as represented by the work of six major contemporary performers/writers of the stage and screen: Joseph Brodsky, Derek Walcott, Eugenio Barba, Josef Nadj, Wajdi Mouawad and Atom Egoyan.

Co-editor of two books on a similar subject —Performance, Exile and ‘America’ (with Dr. Silvija Jestrovic) Palgrave, 2009; and Adapting Chekhov: The Text and Its Mutations (with Dr. J. Douglas Clayton) Routledge, 2012 she is well acquainted with concepts related to the theme of exile such as “migrant” and “postmigrant” playwrights, diasporic authors, hybrid theatre, alterity, a poetics of “relation,” of the “tout monde” of the “ postcolonial” and the “postmodern.”

All signify border zones of identity, the evolving landscapes of a cultural existence as individuals concerned come into contact with racism, discrimination, transnational societies and different ways of seeing the world as a result of their personal displacements which inform their theatre. The exilic thus becomes a contemporary umbrella concept since, in the author’s mind, exile is no longer only associated with the traditional exilic idea of banishment, or the obligation of the individual to leave one’s home. Instead, it is also related to the “nomadic consciousness” which comes into play as the exilic performative shifts to the reiterative process that defines the existential voyage of self-discovery.

She draws on many cultural scenarios: Russian, Lebanese, English-speaking Caribbean, Italian, Danish, Serbian, Hungarian and Armenian, French and Canadian, focussing on particularities of language, on identity crisis, on reclaiming ones creative potential, on behaviour marked by shifting socio-geographical space, by troubled adolescence and by the need to reconstruct a forgotten or unknown identity as discovered through the experiences of the parents. Thus, she delves into the formative exilic experiences that have shaped the relations of these artists with the world as well as their writing and their stage and screen practices.

Such exilic artists who might not appear to have much in common, quickly reveal that they share an artistic process, originating at the point of intersection between the original knowledge and the demands of the newly adopted country’s culture and then evolving through their own choices, into a form of the exilic performative, which emerges as a clearly cosmopolitan theatre.

Nobel prize winner Derek Walcott is definitely the postmodern “alienated traveler” whose plays act as “a mediator between his native and adopted cultures,” the result of a reiterative process endemic to the artist who needs to keep his art in a constant state of geographical, cultural and social flux so that new relations can always be constructed. He expresses his Caribeanness through his Trinidadian theatre laboratory, while always operating within his inherited knowledge of British culture and the techniques of the modernist writers of the great Western traditions (The Odyssey).

This dynamic has become the major defining characteristic of his theatre and I see how it is closely associated with Edouard Glissant’s rhizomatic consciousness found in his Poétique de la relation, the notion of “antillanité” which finds it’s parallel in the postmodern rethinking of the Deleuze and Guattari essay. It is linked to a sense of history that is cyclical, rather than linear, constantly reorganizing itself into various patterns with new cultural partners.

There is no question that the essence of Walcott’s exilic performance has gone through periods of carnival role-playing and postcolonial mimicry (Pantomime or In a Fine Castle) as well as Caribbean rhythms and sound patterns of the Trinidadian Steele band culture which has contributed to Walcott’s redefining of a new aesthetics of poetic theatre. Thus, this reader recognizes that his work is close to the thinking of Glissant as well as to that of Benitez-Rojo who applied the metaphor of the “Archipelago” to the Caribbean.

This series of repeating islands, perhaps similar to Barba’s floating island of no roots and no geographical boundaries captures the essence of the exilic performative, where the Caribbean actor exiled abroad (A Branch of the Blue Nile), is played out through the nomadic dynamics within a space devoid of a centre, of boundaries, of a circumference, in other words, within the essential borderlessness of the world as seen by the exilic gaze.

Eugenio Barba’s Odin Teatret, is a community of nomads where the notion of exile is the basis of the survival instinct of the “communitas.” His exile is not a reiterative process of discovery but in this community of self-imposed exile, the members must be subjected to a form of exilic endurance, building a new home where they are first stripped of their cultural memory to allow the rise of the “new actor,” a new nomadic identity within a new culture that is, ideally, free from all cultural roots. Again, it appears to this reader that Barba’s transcultural exilic brings him into close association with the thinking of Cuban ethnomusicologist Fernando Ortiz whose idea of close reciprocal exchanges between newly arrived peoples (colonial invaders, immigrants, slaves etc.) and indigenous peoples producing a brand new culture resulting from these transmutations , defined the new process of cultural transformation within postcolonial America.

As for Josef Nadj of Serbo-Hungarian origin working in France, his exilic state does not attempt to strip cultural memory but to preserve the memory, the imaginary homeland through corporeal theatre performances which are more often choreographed memories of his dancing self as he builds his home abroad with a community of international dancers working in multicultural conditions.

According to Meerzon, the younger generation of artists, such as Wajdi Mouawad and Atom Egoyan, began by rejecting their cultural past that never was part of their life in Canada. Even though the artist has no clear memories of the old homeland, the individual is still defined by his present-day surroundings as the “immigrant” who comes from somewhere else. More recently in a discussion with Mani Soleymanlou I attended at the University of Ottawa, we heard a similar explanation from the actor/playwright who stated that it was the Quebec milieu that defined him as a non-Québécois Iranian (or even an Arab !) and awoke his interest in his parents post exilic memory when he had no recollection of that country he left as a very small boy.

Thus, we might say that the gaze of the dominant group is interiorized by the “outsider,” as Fanon the existentialist anti-colonial psychiatrist has always explained (Peau noire, masque blanc), creating the desire to construct a Canadian identity and resemble the majority, along with a desire to search for one’s own unknown culture. Egoyan, in his quest for the ancestors he never knew, feeds off his exilic nostalgia, a post-memory process related to his parents.

Similarly, the theatre of Wajdi Mouawad is a space where cultural, linguistic and generational categories intersect with imagined testimony of his horrors of war, of the dysfunctional family, and actual accounts of the homeland he never knew. His plays are dialogues between the real and the imaginary as he attempts to bear witness to his own exilic childhood, creating a “homogenized,” impossible and thus borderless identity.

The book explores a wide range of concepts that intersect under the contemporary umbrella concept of the exilic performative. Thus, it appears that this approach can be an indispensable tool for the understanding of contemporary theatre, given the way artists are constantly changing borders. One cannot ignore the new global production links between European and North American theatre companies and cultural centres whose collaborations produce some of the most interesting new experiments in present day theatre (think of Castellucci and Lepage) no matter what the origin of the companies.

Meerzon concludes by quoting Appadurai (Patriotism and its Future), Agamben (Means Without End) and Rebellato (Theatre and Globalization): “it is the experience of exile that teaches one the lessons of the post-national condition, global citizenship, transnational lifestyle, or better, cosmopolitan reality.”

Shouldn’t we now relate this experience of exile to the present day quest for exilic categories that define contemporary theatre aesthetics as borderless, post-national, transcultural, and certainly cosmopolitan. It is clear that exilic performance artists, all involved in constructing fictional worlds through this process of self re-creation and ultimately self-healing, are actively redefining their status as the new citizens of the world. 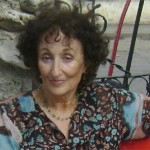 [1] Alvina Ruprecht is a member of the Board of Directors of the Canadian Theatre Critics Association and head of the Ottawa-based Capital Critics Circle.A reviewer for CBC Radio for 30 years and  currently ProfessorEmeritus from Carleton Universitiy, her specialties include francophone theatre. She has published widely on Caribbean French language theatres of the Caribbean.