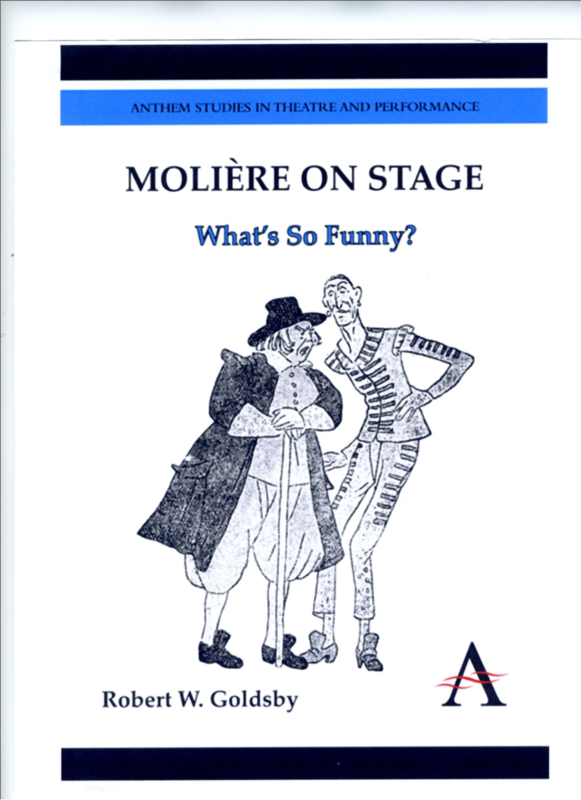 It’s unusual to discover a thorough and successful book on a major playwright written by a professional performer or director. For one thing, one would expect most of the book to be self-centered (as theater people sometimes are), and to focus attention on the productions in which the author has personally participated.

Which is one of several things that make Robert W. Goldsby’s Molière on Stage: What’s So  Funny? unique and invaluable. Although as a professional theatre director he has master-minded 15 productions of Molière plays—and 142 other plays—only a small portion of this book is devoted to descriptions and analyses of his own work (in which he occasionally collaborated with his wife, the actress and director Angela Paton). Even these are introduced in a conversational way when he regards his own approach to  characters or scenes from Molière as unusually novel or provocative.

In between, he describes productions of 19 plays mounted by such directors as Molière himself (taken from contemporary accounts), Jacques Copeau (taken from his prompt-book for Les Fourberies de Scapin); Louis Jouvet, Charles Dullin, Pierre Dux, Jean-Louis Barrault, Robert Falls, Ariane Mnouchkine, Jacques Lasalle, Dominique Serrand, and Stephen Wadsworth—all of whose work he has seen—to give the reader a sense of the many ways in which Molière’s  brilliantly written texts can be brought to life on stage.

Of the original Tartuffe, Goldsby tells us that it was performed in an enormous stage garden space at Versailles at the end of a three-day festival for the king. All  around the play were gold, jewels and torches, musicians, singers, dancers and horses, artifice and eroticism. It’s hard to imagine Tartuffe in this setting today, but its anti-clerical bias offended many of the churchly-inclined present, who managed to get it banned from the public stage for five years.

For an elaborate production of Don Juan (originally spelled Dom Juan) planned for Grenoble—which was never  given—Molière’s company asked for a palace with a magnificent garden framed in receding perspective; a scene of rocks by the sea; a forest with a temple in the background, which later opens up to reveal white marble statues, including that of a commander he had murdered; the splendid room to which Don Juan invites the statue to dinner; and a vista with a row of statues diminishing into infinity from which—after a display of thunder and lightning—the commander’s statue throws Don Juan into a pit of flames.

Another major production described persuasively is L’École des femmes directed by Louis Jouvet, which Goldsby saw in New York in 1951. He describes not only Christian Bérard’s ingenious sets, but also the means by which Jouvet was able to realize and draw laughs out of the foolish, arrogant Arnolphe.

Goldsby’s own most highly regarded production of a Molière play—which I saw—was Tartuffe, for the Los Angeles Theater Center in 1986, which he describes in detail. He pays a great deal of credit to Ron Liebman, his Tartuffe as did critic Sylvie Drake in The Los Angeles Times:

As the hypocritical prelate who insinuates himself into the household of the gullible Orgon, Ron Leibman pulls out all the stops… Tall, muscular and sexy, he’s also atypical casting. But the uncommon appearance is only one aspect of an intensely personal performance.

Leibman is the kind of actor who thinks on his feet and has a character worked out to the fingertips. Body language is maximized—from sideways glances or a sudden, manic laugh to something as calculated as an index finger picking up three drops of gravy on a table as though tipped with flypaper.

When this Tartuffe is pursuing the unshakable Elmire . . . he is consumed with ardor, expelling a hissing cry of anguish at the mere touch of her gown.  . . . And when Elmire dupes him into believing she might surrender, he unhesitatingly guides her hand to his crotch—just a suggestion, mind you, but as startling as it is raw.

Startling and uncommon gestures are the hallmark of this show. Inspired (and less inspired) touches abound to tell us director Robert W. Goldsby had plenty to do with all the choices in the play.

Goldsby takes pains to describe how he set and staged (and Liebman enacted) Tartuffe’s first, belated entry onto the stage, in Act III, climbing up dark stairs from below in a dirty monk’s cloak, a Bible hung from his belt, gnawing on a chicken bone.

Ariane Mnouchkine’s 1996 production of Tartuffe at Vincennes, in contrast, seemed to be set somewhere in the Near East, with Tartuffe as the leader of a bearded, fundamentalist, terrorist cult plotting against the community’s domestic tranquility. Staged with a certain contemporary political axe to grind, the play was returned to the original, uncensored text, in which Tartuffe triumphs. The family he destroyed is left “dumbfounded and bereft.”

The 23-page chapter on Don Juan is primarily devoted to describing productions such as Jacques Lasalle’s for the Comédie-Française (which Goldsby saw in 1995), his own production at the Marin Shakespeare Company in 2003 (which I saw) and Stephen Wadsworth’s at the Old Globe in San Diego, which he saw in 2004. For each of these, he is able to describe in detail not only the intricate, changing sets, but also the  costumes, the interpretations of the directors and the performances—even  to slight, changing gestures—of the actors. It also allows him to quote and elaborate eloquently on the  genial theological disputes between Don Juan and his servant-buddy Sganarelle.

One of the best passages he quotes from Don Juancomes from his and Angela Paton’s super-vernacular adaptation of Pierrot’s description to his sweetheart Charlotte of the two nearly-drowned French gentlemen (Don Juan and Sganarelle) he has just saved. It seems to communicate at once all classes of 17th-century France, which probably only Molière could do with such convincing and comical finesse:

We took ‘em home to the fireplace and they stripped stark-nekkid to dry off, and then in coom Mathurine and one of them made sheep’s eyes at her all nekkid-like. He must be some great, great man, cause he had gold on his clothes from top to bottom, and even his servants was swell themselves. What a mess of fiddle-fadddle doohickeys these gentlemen wear. You know, Charlotte, they got hair that ain’t stuck in their heads and they put it on like a great hunk of a hat. They got shirts and sleeves so big you an’ me could crawl inside—if we wanted, yuh boy, together. ’Stead of pants they wear a skirt thing as big as from here to Easter. They wear little teeny vesty things that don’t reach down to their ass. They got great lace bandannas with four huge hunks of linen which is hanging from their fronts. They got itty bitty frilly things round their waists, great globs of stuff round their legs, and all over the place they got ribbons, ribbons, hunks of ribbons, so many ribbons it adds up to a sort of mish-mash of ribbons. Even they shoes be stuffed with ‘em from one end to the other. I’d break my neck in ‘em, that’s for sure.

Dominique Serrand’s brilliantly imaginative production of L’Avare in 2005 at La Jolla was, he writes, “the best production of this play I have ever seen.” He analyzes eight different comedic stages or lazzi in a scene between Harpagon and his servant La Flèche over his missing money box. Stephen Epp’s Harpagon he calls “a virtuoso performance.”

Goldsby has a fine ear for the exquisite difference between the sounds of French and English vowels and consonants, and occasionally finds translations lacking—although he tends to admire Richard Wilbur’s. And I admire his ability to detect and define the comedy that lies behind the rapid, staccato exchange of lines—often repeated lines–in short exchanges between two people talking at cross-purposes. In fact, line-repetition alone he identifies as a major source of laughter.

But giving directors ideas on how to convert classical text into living theater (and doubling audiences’ pleasure by giving them an insight into and appreciation of how this works) are only a part of Goldsby’s contribution. He has also been translating French plays and teaching actors and directors for over 60 years. A citizen of the academy as well as the theatre, Goldsby most vividly demonstrates this by the attention he devotes to the relationship between the playwright’s private and inner life and the emotions and attitudes of his characters, which he frequently finds very close indeed. For each play he discusses, he begins with his own picture of Molière’s own romantic and passionate state, and links that to the characters and actions he feels compelled to create.

It should be noted here that several of the plays Goldsby writes about are not, strictly speaking, comedies. Due perhaps to the deep personal feelings that underlay them, and his dead-serious hatred of hypocrites, sanctimonious bigots, the unnaturally greedy and selfish, moralistic critics and censors, they sometimes end with scenes at which one could not possibly laugh: Tartuffe (in the 1669 Palais Royal version) taken off to prison, Don Juan dragged off to hell, Célimène left alone onstage after being hectored, lectured to and insulted by her demanding, misanthropic lover. (“Nowadays,” wrote director Pierre Dux of Le Misanthrope in 1977, “Alceste no longer makes us laugh.”) And Mr. Goldsby makes it clear that if the best of these plays are, in fact, the best comedies in western literature, they are also much more than that. 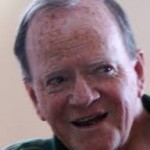 [1] David Littlejohn has been a critic for the Wall Street Journal since 1990 and has also worked for U.S. Public Broadcasting (PBS) and The Times of London.  He was a Professor of English and journalism at the University of California from 1963 to 1999 and has written and/or edited 16 books.

Molière On Stage: What’s So Funny?