A Finnish fellow theatre critic, Matti Linnavuori, once told me that middle-aged and older Finns have a lovely way of saying “How are you doing?” He gave me a good English translation, which goes like this: “Aren’t you even dead yet?” I simply love it.

The colloquium asks us the same question, because its title,Theatre Critics/Criticism – Disappearance or Transformation?can be paraphrased, I think, like this: “Are theatre critics dying today (or even dead)? Or are they just changing to adapt to the times?” It is a good question, and an old one, but I presume, by the looks of my international colleagues, that we are not even dead yet. The question is just another way of saying, “How are you doing?”

Now, how are we doing in IATC Japan? The diagnosis is not particularly uplifting. We have been issuing a theatre journal called Theatre Arts. It started in 1994 with the intention of giving theatre critics in Japan opportunities to be published. Back in those days, the number of theatre journals was diminishing. One famous theatre monthly called Shingeki, which had been published since 1954, ceased publication in 1992, to the great shock of many Japanese theatre critics. That was certainly one of the greatest motives for us in IATC Japan to start a journal of our own. Now it is a quarterly. I am currently on the editorial board. Our latest issue is the 56th. Like everywhere else, we are having financial problems. IATC Japan is not even a registered non-profit organisation; it is more like a club, with no paid permanent staff, and for that matter, not even a permanent office. As a result, the journal receives absolutely no public financial support whatsoever. All its editorial board members are working on a purely voluntary basis. We depend upon the unpaid labour of our members and general contributors so that we don’t have to pay for articles. Our journal is living off the subscription fees from our members and general readers. It also receives publicity from theatres, and festivals (mostly public ones), and, occasionally, from publishers. It is not dead yet, but it is in a precarious position.

What we have been doing to adapt to the harsh times is nothing radical. We have been quite active in our efforts to expand our subscription among general readers. We publish new plays, which we hope will sell at theatres when they are performed. We give talks and moderate post-performance discussion sessions. We have tried to get more advertisements, and for that purpose we are thinking of publishing articles about future shows which can enlighten our readers before they buy tickets; we will see to it, of course, that this won’t compromise our editorial independence. We hold monthly critical seminars for general theatregoers who wish to discuss the plays they have seen with others and improve the way they articulate their viewing experiences. Also, we have been searching for a new publisher who would be more enthusiastic – and more financially helpful and understanding – about expanding the readership of our journal.

What is the purpose of all of this? We are not a bunch of judgmental megalomaniacs who like to behave as if we could make or break any show we see. I wouldn’t call the nature of our trade parasitical, but the fact remains that without theatre productions there will be no theatre criticism. One of our modest goals is to provide the right cultural contexts, cultural backgrounds, and critical perspective(s), so that we can enrich the viewing experience of general theatregoers. We want our readers to feel that they can claim a share in the ownership of the shows they have seen or will see in their own lives. If there is anything judgmental in the things we write and say, it should be an integral part of the dialogue we try to hold with our readers and theatre-makers, so that we can all say that we have our own share in the production.

Perhaps more importantly, we don’t want our readers to measure the performances simply in terms of whether they were worth their money and time, although theatre tickets can be very expensive in Tokyo, and people are always busy. Rather, we want them to question the very idea of cultural ownership. We want audience members to simultaneously feel they have a share in the production, whilst also remaining open to cultural experiences which give them an opportunity to experience something unfamiliar to them. In theatre, we can hold a dialogue with foreigners, and with fellow country people whom we have never met. We can even communicate with dead people, because in our imagined community of theatre, they are not even dead yet.

Admittedly, in what Benedict Anderson calls this “imagined community” – the only thing that connects the show with the audience is the awareness of difference. However, I believe criticism is not only helpful but also necessary in order to foster that sort of awareness through contextualization. The movie Hellzapoppin, a Universal Pictures film made in 1941, based on the original musical revue that premiered in 1938, offers a bad example of the relationship between the stage and the audience.[2] It features a scene involving the famous Whitey’s Lindy Hoppers, pioneering black club dancers in the 1930s. The dancers are goofing around, having a good time, thinking they are only among themselves. Their musical session culminates in remarkably athletic lindy-hopping towards the end. Exhausted, they all lie down on the floor, but then they hear the applause from the white spectators who were watching the scene all along without being noticed. The dancers run out hurriedly.

Now my question is this. Can we say that the white viewers that appear and applaud at the end have their share in the ownership of the spectacle? My answer is no. They simply consumed the spectacle for free. The class structure should be obvious enough. It is stereotyping: black people are musically talented and often fun to watch, but they need to be overseen if you are their employer. They had to scuttle off after the lindy-hopping, because it was the way the movie was designed to assure its supposedly white spectators that those black fun-lovers, however athletic, have internalized the panoptical gaze of white people after all. The original poster of the movie has only white actors and no black ones.[3] It is interesting that when it was reissued in a DVD in France (2007), the jacket featured a black woman who is trying to cover herself, being aware of the unmistakably voyeuristic gaze from the white people watching her from outside the window.[4]

It would be easy to convince many readers of the sheer joy of watching this lindy hopping scene. I have watched it many times myself on YouTube. However, theatre critics should also be able to point out the underlying context of the scene as well if we are to help the piece have a second life in our own times in the way both theatre-makers and theatregoers can have a share in the piece. Theatre critics can provide the context so that the audience will not just consume it, and there are times when spectators should be told how the thing they see on the stage are different from their lives. This is what I mean when I say we theatre critics should be able to enrich viewing experiences through the awareness of difference.

This applies to the theatre scene in Japan after the 2011 earthquake. As life in Tokyo was relatively unaffected, playwrights in Tokyo had to gauge the appropriate moral distance from the truly afflicted in commenting upon the 3/11 earthquake and its aftermath. It was felt to be morally presumptuous to stage the ongoing sorrow of the most devastated in the Tohoku area even as a show of compassion and support. They needed the right awareness of differences. As long as we theatre critics can help provide the enriching perspective to theatre-goers, if only to share that awareness of differences, we are not even dead yet. It is almost fashionable to lament the possible extinction of theatre criticism as a profession in the time of internet, but the means should not be confused with the goal. If critics have something they can and should deliver, the means cannot and should not be the obstacle to making it happen.

Postscript: On 23 February 2014, nearly four months after the delivery of this paper in Bucharest, IATC Japan formally decided to change Theatre Arts from a quarterly to a yearbook due to insurmountable financial difficulties. However, we have also decided to publish our monthly reviews on our Theatre Artsweb site, which is due to open in August 2014. 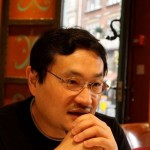 [1] Manabu Noda is Professor at Meiji University, Tokyo, Japan.  As a theatre critic and researcher, he has written on British and Japanese acting and theatre history.  He is currently on the editorial board of the Theatre Arts (IATC Japan).