Who is Lars Norén? 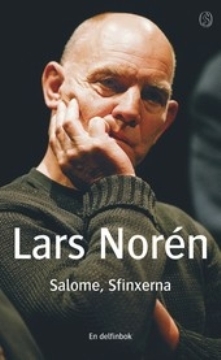 The Swedish playwright Lars Norén (born 1944) published his first book of poetry at the age of nineteen. In 1973 came his first stage play. A prolific playwright, he is now widely translated and performed in Europe and the United States.

The book is a heavy volume with unnumbered pages. Even his native Swedes have made varying counts, but ca 1700 pages is a fairly reliable figure.

Norén kept a diary from August 2000 to summer 2005 and not only that, he then retyped it, apparently with only very light editing. He writes with a typewriter, not a computer.

All that time Norén was busy directing, and writing his own plays. He sometimes mentions an idea for a new play, but seldom goes into detail. By reading the diary one cannot gain an insight into how Norén treats or solves his artistic problems, only that he rewrites and revises continuously. Instead, the diary paints an accurate picture of the conditions, the landscape in which he does his creative work.

Norén rarely goes to the theatre to see the work of other directors, but is always delighted to hear from his trusted friends that such-and-such a production was bad.

The diary is very outspoken; e.g. Norén feels free to attack the highest theatrical authority in the country, namely Ingmar Bergman, by noting that “Bergman’s productions of the last ten years have been like hospital food, already eaten up and shitted out when it is served” (September 9, 2002, my translations from Swedish).

Looking for potentially scandalous outspokenness is, however, not the only or even the best reward one gets from this giant. Besides, the sheer mass of the book will dishearten any trivial reader, but at the same time, no one could be as trivial as Norén himself.

He registers the content of his meals so carefully that the repetition makes a nauseating read. He buys expensive designer clothes and complains he cannot afford them. He regularly falls in love with the most beautiful actress in his production and makes his presence felt in her life. He toils in the garden of his summer house, where “the roses are unheard-of” (July 7, 2002).

Early on Norén decides to publish the diary. From then on he also keeps repeating that he will have no friends after publication date. He writes down hearsay, because after all, this is a private diary. He did not directly witness a critic fall asleep during a performance, but when Norén published his name, this was received as an accusation.

The relationship between Norén and the media was strained to begin with. In 1999, escaped neo-Nazi inmates from his prison production 7:3 killed two policemen in the village of Malexander, and the media suggested Norén should publicly admit at least partial guilt.
No wonder then that hell according to Norén is the news desk of the tabloid paper Expressen (Apr 27, 2004). Norén declares one Swedish critic “a vulgar alcoholic” (May 27, 2001) and another one “a dog with lipstick” (Sep 20, 2001).

Norén seems to feel that the media by its sheer presence may endanger one’s artistic integrity. “I feel proud to have Dagens Nyheter (a Swedish daily) as my enemy. I don’t want to see how a flattering cautiousness would creep into my language and into my understanding of the world” (Nov 2000).
This does not mean that Norén would categorically reject journalism as such and individual journalists. Someone from Dagens Nyheter sat in the rehearsals of The Seagull and offered his article for Norén to read prior to publication. “Actually I think it is wrong. One should not sanction something others write about one. A journalist should be free in his opinions and points of view. If he wishes to check facts it is naturally another thing. But for his points of view he should be responsible himself” (May 12, 2001).

From a geographical distance it is possible to overlook the offensiveness and to read the diary as a lesson in understanding acting. Norén is a playwright, who first took to directing at the age of 49, but he discerns nuances and meanings in acting that a critic also should be able to perceive.

According to Norén, one Swedish critic is tired and disgusted because she must see so much theatre, and to get a reaction out of her the stage grammar needs to become more and more brutal (Sept 22, 2002). I share her experience, which is all the more reason to turn to Norén’s observations. I suppose many critics can also identify with Norén’s self-description: “I am never calm, happy and relaxed. Not at the same time” (Aug 15, 2002).

The sentences are so open and beautiful that I am becoming a reluctant fan, and then this: “I have been sorrowful for the last two weeks, or more precisely, my entire life” (July 10, 2001). Be it self-pity or disarming frankness, nevertheless it is excellent writing.

Norén values no-nonsense acting. I want to have an actor who is not deformed by the skill of acting, he writes, someone who does not continuously observe himself and his position on the stage (Oct 31, 2000).

Norén offers an example of how not to act. Instead of respecting the memory of a recently deceased Swedish star actor, Norén blames the star for making his co-actors look bad. Not because he was so damn much better, Norén writes, but because he stole life from them. He stole their reaction by not reacting to them (Feb 7, 2004).

When directing, Norén says, I am interested only in what the actors don’t know about themselves. “All else, the hidden, the injuries, the shortcomings, what must be compensated for, they have learnt to live with” (Feb 17, 2001).

When in the audience, Norén keeps his eyes on the actor who is being spoken to, not the one who is speaking (May 9, 2001).

Actors have a habit, which is perhaps intellectual laziness. They like to say that the actor must defend or even idealize his character to be able to play him, particularly when the character makes himself guilty of unforgivable crimes. Norén dismisses this, because actors don’t usually go to that much trouble. “They often play themselves without any form of idealizing or even defending” (June 25, 2003).

The Royal Dramatic Theatre (Dramaten) is the most prestigious theatre in Sweden. Apparently the actors who have made it in Dramaten feel a social pressure to be coy about it. Norén is not amused: “I am sick and tired of spoiled actors who want nothing more than be with Dramaten, even though they brag how awful it is in there. How they long to get away from Dramaten, how they long after something meaningful. No one wants to be there, but they are there anyway. No one wants to be there, but it is extremely cool to be there” (March19, 2001).

During the writing of the diary Norén directed not only for Riksteatern in Sweden, but also in Norway, many and Switzerland-France.

Norén compares his own directing to playing a musical instrument. “I listened to Miles Davis and Sonny Stitt in concert at Olympia in 1960. One knows which phrase Sonny Stitt will play next. With Miles one does not. One knows it with most actors. But there are some who surprise me almost every time. I want those with whom I work now to surprise themselves. I want them to pay attention to things they don’t know about themselves (Sept 18, 2003).

Norén does not value the fashionable way of directing. “Our era looks for directors who have a command of the visual, but totally lack knowledge of the actors’ work. They are clever at making pictures and at throwing in music that others have created, but there is nothing behind all that” (Feb 18, 2003).

As a guest director in Berlin Norén is acutely aware that the local audiences have seen it all. He plans to have long silences within his the dialogue in his piece and warns himself: “The Berlin audience has seen it all, and if a pause is one second too long, they will say Now we know what this is all about” (June 19, 2001).

And the Berlin critics are very predictable. “The German critics become irritated if one describes problems with people in their own age and situation. They don’t like to think about how they’re doing. That is something they want to forget when they go to the theatre. They want to see how much more miserably and disgustingly others live (Dec 3, 2001).

Directing the Seagull Norén makes a comment about the ending, where characters long for a better future two hundred years from now. “We are those people and we long back in time to Chekhov’s days. We long for the hope they had. We no longer believe, except individually and when we are still young, that the world can become a better place” (Feb 17, 2001).

Norén refrains from interpreting the characters from his own typewriter. “I try to write in such a way that the characters are just as mysterious and anonymous at the end of the play as they were at the beginning. Not because they are mysterious, irrational, incomprehensible – which they are – but because it is fundamentally impossible to gain knowledge or understanding about what a human being is and why she acts the way she does” (Nov 5, 2003).