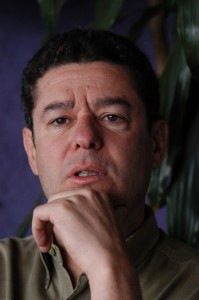 Nobel Prize winner, Octavio Paz, had an enormous influence on every aspect of Mexican culture. Even though he had only one brief contact with the theatre there, he exerted an intense influence on modern Mexican stages through his artistic direction of the second, third and fourth programs given by the Poesia en Voz Alta[2].

In 1956, shortly after returning from France—where he had joined the André Breton circle—Paz selected and translated into Spanish, specially for Mexican audiences, three short plays, by three—at that time unknown— playwrights: Jean Tardieu, Georges Neveux and Eugène Ionesco (Le salon de l’automobile). He completed the program with his first and last attempt to write for the theatre: La hija de Rapaccini. The program notes were written by a most distinguished Mexican writer: Carlos Fuentes (b. 1928).

The importance of his own attempt seems not to have attracted the critics’ attention to an author who, ultimately, has proven to be a continuous presence from that time on in the Mexican theatre: Eugène Ionesco. Nevertheless, it was a young actor from Poesia en Voz Alta who staged here for the first time one of Ionesco’s favourite plays: La cantatrice chauve. The 1960 production by Juan José Gurrola assured the success of the published Spanish version, which was sold out in a very short time.

That same year, three other Ionesco plays were staged in Mexico City: Amédée, La leçon and Les chaises. The latter two were produced by Chilean director Alexandro Jodorowski, who had stayed in Mexico after a tournnée with Marcel Marceau’s mime company, and had continued to produce other Ionesco, Fernando Arrabal and Samuel Beckett’s plays until the 1970s.

Thus, when Ionesco arrived in 1968 in Mexico as part of the Olympic Games Cultural Program, he was already a well-known dramatist. He lectured and travelled around, accompanied by the French productions of three other plays presented by Jacques Mauclair’s company.

From then on, Ionesco was a constant presence on Mexican stages and a strong influence on those Mexican playwrights who had seemed—until then—to be strongly committed to the realistic canon. After all, his preference for macabre situations suited quite well the Mexican sensibility and its humor about the proximity of death.

But Ionesco’s dramatic discovery of language deprived of sense also opened the way to scenic experimentation through directors such as Jodorowski, Gurrola and other participants and heirs to Poesia en Voz Alta. 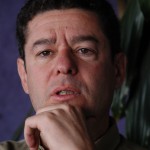 [1] Rodolfo Obregón is a theatre director and critic, as well as a teacher of acting. He has published three books relating Mexican theatre to world theatre. He has been, since 2003, Director of the National Centre for Theatre Research in Mexico.
[2] Poesia en Voz Alta (1956-1963) was a gathering of poets, painters and very young theatre practitioners that represents—in my opinion—the arrival of Meyerhold’s reforms on Mexican stages. Its developments have been registered by American scholar Roni Unger (Poesia en Voz Alta in the Theatre of Mexico, University of Missouri Press, 1981).