However, when we look into Korean society more closely, we find that there is the so-called “unseen self-censorship” that limits playwrights’ imaginations as much as ever.  Korea’s Confucianism still tacitly comes into action as a community’s moral foundation in our 21st century life. For example, sadistic violence, incest, kinship-murder, sexual perversion and a taste for extreme barbarism–these may all be themes that playwrights want to avoid, because the critics are prone to object and audiences are prone to stay away. Despite the fact that young playwrights are now making many attempts to address social and ethical taboos, they also realize there is a new atmosphere. The reasons they don’t attract the public’s attention may stem from their unseen self-censorship regarding social taboos.

Would you explain this “unseen self-censorship” in more detail, or give an example? I think it might strike some readers as an unfamiliar or unclear concept.

Well, the Koreans’ characteristically optimistic world view is itself the most powerful, collective, unconscious self-censorship. Traditionally, we consider our essentially optimistic view of life and our secular sense of community to be virtues. In this sense, you cannot find a single tragic story in the traditional Korean performing arts. The Choyongga–the “hyangga” short, native song-poem of the Koreans of ancient Shilla–is a good example of this, and reveals a lot about the Korean consciousness. The dramatic figure, Choyong, even after witnessing his wife commit adultery, sublimates his grudge and anger into dance and song, which turns her vice into his virtue of generosity. This sort of interpretation-aesthetic is a prominent characteristic of Korean theatre, but it has also come to press on our playwrights through self-censorship. That is, in Korean theatre, dramatic conflicts usually don’t lead to desperate, sharp struggles or strife. The Korean traditional theatre has the “encouraging good and punishing evil” structure, but there is not a single tragic revenge story with a cruel, wretched ending.

However, the very “Korean” playwrights employ a Korean interpretation-aesthetic in order to express our unique drama, and it is not like Western drama at all. From the Western point of view, one may point out the weak dramatic structure; however, our own Korean theatre aesthetic is certainly not at all weak. Rather, I would say it is certainly not social/political censorship that limits the playwright’s imagination, consciously or unconsciously.

2. What if anything is difficult for you in communicating with the director? Why? How early and how often do you exchange views about the coming production? Have you directed yourself, and if so, does that make communication easier?

I am a playwright as well as a director. I have directed many more plays by others, particularly plays from the Greek tragedies, Shakespeare, from Chekhov to Brecht, etc., as well as Korean plays by, for example, Tae-Suk Oh and Gang-Baek Lee, from the old to the young generation.

When I am both writing and directing, I make an effort to control and manage all parts of the production, from the acting style, stage design and musical compositions to even the poster design. I am more like a “total-theatre writer” than just a playwright. Plus, through the total work, I express my own world view and theatrical style.
When I direct the classics, I try to interpret the texts focusing on my own metaphysics. I have never directed others’ plays with no reason besides professional duty. When the play has the potential to intersect with my world view, it is possible work for me. This kind of consciousness, as a total-theatre writer, is my dream role for the playwright.

Therefore, in my concept, the world of the playwright is rather extensive.

All my adapted and creative plays are eager to exist in my name in the world. It is not only hard to translate foreign texts into Korean ones accurately, but we can also say it is definitely another creative act to adapt and direct for the stage. So, what we have is another version of a classic, such as Yun-Taek Lee’s Hamlet, and Yun-Taek Lee’s Faust.

For playwrights, the vertical imagination, having the two pivots of soul and substance, is the starting point for writing. Intuition and sensibility before logic and consciousness stimulate writing. And the aesthetic consciousness consisting of concrete body, image and rhythm is the ultimate goal. But the trouble stems from this: a playwright’s imagination does not always reside in the absolute field of pure soul and substance, because they go through the broad horizontal world of reality. But, to traverse the path of the past-present-future road becomes, for me, quite dull and distressing. In the process, I feel repressed by history, logic, reason, the spirit of the age, scientific philosophy and such things–and I often explain the processes of the world and describe great discourse. This part of the playwright’s vocation to consider history and reality is not easy to overlook, so we have to cross the muddy, sloppy world first. As I walk through the mire, I gaze at the sky. The Big Dipper seems to call me forth to the world of myth and space. I bring the constellation into my soul, and DREAM! It is the only way to endure in this grueling society. That is, the soul and substance in dialectical resistance–the struggle between imagination and reality–is the process of writing.

4. During your career, have you received a particularly insightful piece of criticism? When was that? Do you remember it well enough to quote? What was so important in it?

My major work, Ogu-Ritual of Death, has definitely been examined by the theatre critics and drawn public attention, though I completed the play in only three days and two nights. It has an episodic structure: mother’s dream, mother and brother’s dialogue, dressing the deceased, a house in mourning, the dead soul’s messenger and so on.

I didn’t think it was a creative piece of writing at all at first, because my task was just to loosely link the traces of traditional Korean life that still remain as living customs here and now. However, you yourself, a respected theatre critic, judged it to be the best Korean play since 1945 in your review, “Paradox and a Topsy-Turvy Co-existence.” Also, when the theatre critics regarded this play as representative of the Korean dramatic style, and the academics did follow-up studies on theatrical space, meta-dramatic structure, etc., paradoxically, I had a chance to think deeply about the identity of Korean theatre.

5. Will you introduce us to your recent work?

I am working on a new production, Time to Offer a Flower; I finished the first draft of the script last year, and am in the process of revising a version that will be appropriate for a small to mid-sized theatre. The story is about the character’s reunion with his first love. One day I got the idea from traces of the Shilla hyangga, Hunhwaga, by chance. I considered how to dissolve my very private narrative into Hunhwaga‘s structure. It will be on stage around the Fall of 2010. Also, I am going to direct my adaptation of Hamlet once again, with a somewhat newer feeling. My Hamlet has been performed for over 10 years with the same text, but lately I feel like revising it. The revision will include analyzing the characters’ inner spaces in detail, while retaining the old, fundamentally theatrical style, and I will show the new, modern–but also very Shakespearean–Hamlet. 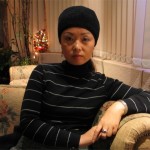