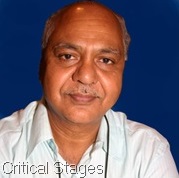 The theatre traditions of India are more than 2500 years old dating back to the Natyashastra, an ancient book on the science of theatre by Bharata Muni. Rarely looked at, however, are the references to theatre criticism described by Bharata. Created roughly around the same time as Aristotle’s Poetics, the Natyashastra explains almost every aspect of theatre from aesthetic theories to histrionic practice, from technical work on the stage to management. This systematic methodology is reflected in its very title — Natya means theatre and shastra means science.

Perhaps Bharata did not think of theatre criticism as a profession but he certainly spoke about how one assesses a work of theatre in chapter 27. He also speaks there about the possibilities of unforeseen obstacles in the performance, about appropriate audience response as well as some words on the qualifications of those who would speak about a production. The entire chapter indicates a profound sensibility about what we today would call criticism.

For Bharata, the spectator’s response was a major mirror of the success or failure of a performance in this Sanskrit period. That is, Bharata speaks about the “judges” rather than of the “critics.” Put another way, Bharata wanted the responsibilities of each audience member laid down clearly since, to him, the main purpose of the theatre was to intellectually enrich the masses (that is, those who could not directly study the sacred books, the Vedas).

According to Bharata, theatrical success is of two kinds: Divine and Human. Both have their origin in theatre through representation and representation in its turn involves speech, gesture, make up and emotion. Reactions would include, as he lists them:

— calling out statements such as “well done”

— calling out statements such as “wonderful”

— Emotional uproar in the audience.

— When the actor delineates emotion fairly well, the audience (critic) should respond to it with a smile.

— When the actor gives us recognisable humor and speech, the audience (critic) should always respond to it with a half smile.

— When we see bragging and funny attire, we should respond with boisterous laughter.

— When virtuous speech is given excellently, the audience should respond by saying ‘well done’.

— When the actor shows truly positive states of emotions, one should exclaim ‘How wonderful’.

— If there is a strong representation of pathos, the spectator should say out loud ‘alas” with tears.

In general, Bharata suggests that seeing outstanding emotions and wonders with representations of the related ideas should also bring loud applause. He says that during curious events the spectator can stand up indicating discomfort while during fights the spectator should feel like running away in fright. Tears on a stage should be greeted by tears in the audience; deep sighs with deep sighs.

If a performance is disturbed by Nature, Bharata suggests trying to ignore it. Make no sound even if it is a meteor. Divine or supernatural obstructions like fire, rain, whirlwinds, elephants running amok, angry snakes, collapse of the pavilion, termites, ants and cattle entering the stage they should be ignored as much as possible. Even earthquakes, lightning, typhoons and thunder are part of nature and should be ignored in responding to the performance.

On the other hand, self-inflicted troubles can be noted including an actor’s stage fright, wrong gestures, unsuitable attire, forgetting lines, wrong delivery of dialogue, a choking in the throat and fatigue. However, problems caused by the jealousy of one performer toward another (including enmity, bias and difference in understanding of situations) are not to be against the credit of the actor who is the victim.
In responding to a performance, an audience member (critic) should not indulge in continuous boisterous laughter, catcalls, clapping of hands, beating of musical time (either correctly or incorrectly), the throwing of cow dung, clods of mud, bunches of grass, pebbles and the like.

One should also be aware of isolated occurrences such as the falling of a crown from someone’s head or the dropping of an ornament, errors in the playing of a drum, mistakes in dialogue and singing, the swarming of flies or ants. All these might hamper the success of a performance. These will all influence audience response.

Even today, audience responses to a performance in India are often vocal. Clearly, the ideas of the Natyashastra were carried from one generation to the next in oral form thus providing a way of seeing and responding. It is still the root of all Indian dramatic criticism. It argues against the following in dramatic writing and playing:

— Repetition, wrong or disjointed usage, meaninglessness, mistakes in gender, dropping of prosody and meter, errors in short and long vowels and non-observance of pauses.

— Recitation without clarity of words, wrong pronunciation of syllables and vowels, wearing of ornaments improperly, tilting of crowns to the side, ignorance of the modes of getting down from a horse, a chariot, donkey, elephant or camel, improper handling of weapons and armor, and delays in entering the stage. All these are hindrances which could be noted by intelligent spectators.

Bharata suggests as well that:

— An expert in dramaturgy should note down the success and the fault of each
performance immediately after the stage is cleaned;

— In a festival relating to a particular deity, the reciting of a benedictory stanza referring to another deity is a fault;

— A play should not make reference to any other authors except with permission;

— Language should be easily comprehensible for audiences.

Interestingly, Bharata also suggests some essential qualifications for the prashnika (a word that in Sanskrit means the one who puts questions, the arbitrator or, in other words, the critic). He suggests that they should:

— Have great moral strength and should belong to noble families;

— know how to be quiet and should possess sound knowledge in the scientific traditions of theatre;

— Be impartial and mature in age;

— Understand dramaturgy and the making of theatre;

— Be fond of learning and have purity of heart;

— Be expert in four types of musical instruments;

— Have knowledge in the matter of dress;

— Be proficient in languages;

— Be expert in arts and artifacts;

— Be familiar with the principles of the four types of representation (speech, emotion, gesture and dress);

— Be knowledgeable with the Rasas and Bhavas (sentiments and emotions);

— Be conversant with the rules of grammar and prosody;

— Be well versed in the different streams of knowledge.

Bharata finally suggests that this person’s seat should not be too close or too far from the stage so that they could feel comfortable while recording the successes and faults of the performance with a pure mental disposition and a single-minded devotion. 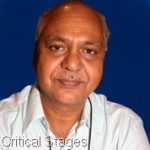 [1] Ravi Chaturvedi is the Chair of the Department of Dramatics at the University of Rajasthan in Jaipur, India.

Indian Critics and the Natyashastra